The Financial Supervisory Commission (FSC) estimates that MSCI’s decision to reduce Taiwan’s weighting will result in a foreign fund outflow of US$56 million, which accounts for only 0.006% of the total market capitalization held by foreign institutional investors. MSCI’s adjustment is not expected to have a significant impact on the local stock market, according to the FSC.

Analyzing Taiwan stock trends over the past three years, the FSC said that Taiwan’s stock market is mainly influenced by the international stock market and the island’s economic fundamentals. MSCI’s index adjustments are not directly tied to overall share prices.

Young Liu, chairman of Taiwan-based manufacturing giant Hon Hai Precision Industry Co., announced in February the recent progress on its plans to expand electric vehicle (EV) production this year. He noted that the company will conclude a formal agreement with its partners in Indonesia in March and that construction on its Thailand plant will begin this year, with production slated to commence in 2024.

Meanwhile, Liu revealed that two new EV models will be rolled out on Hon Hai Tech Day later this year. He stated that mass production of the Endurance electric pickup truck, a collaboration between Hon Hai and U.S. based electric light-duty pickup truck provider Lordstown Motors, will be reached in the third quarter of 2022 at the earliest.

Hon Hai aims to secure NT$20 billion (US$717 million) in sales of automotive components this year. As for the company’s semiconductor projects, year-on-year growth is expected to reach 10% to 20% in 2022.

In an interview with Germany’s Frankfurter Allgemeine Zeitung, EU Commissioner for Internal Market Thierry Breton said Europe is specifically interested in more advanced manufacturing capacity such as chips produced on the 5-nanometer or smaller process nodes. He expects that major industry players will begin investing soon.

Breton said that if Europe is to become the leading player in the global semiconductor market, it must establish two to four “mega-fabs” – large-scale chip manufacturing facilities. Superpowers across the world are aware of the importance of chip autonomy, and China, the U.S., and others are all building fabs.

Securing the supply of the most advanced chips has become “an economic and geopolitical priority,” said Breton, who also lauded Taiwan’s leading position in the semiconductor industry. He noted that Europe relies on Taiwan for over half of its total demand for chips.

This edition was translated from the original Chinese by Aimee Wu. 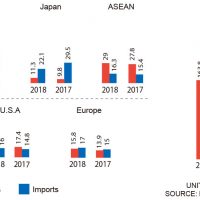 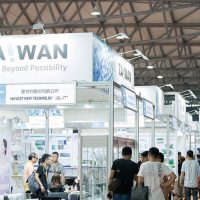