While many in Taiwan view GDP growth as the most important indicator of the island's prosperity, others, such as longtime foreign resident Tammy Turner (front row, in orange), say that the focus should be more on environmental sustainability and social welfare. PHOTO: Tammy Turner

With extremely low fertility rates and a population barreling toward super-aged status, Taiwan must think creatively about how to counter the worst effects of  demographic change.

At 1.218 children per woman, Taiwan has the lowest fertility rate in the world, below those of South Korea and Singapore, according to a 2019 report by the U.S. Central Intelligence Agency. The report prompted a round of soul-searching in Taiwan over why young Taiwanese are forgoing having kids and what this means for Taiwan’s future.

But Taiwan’s demographic woes actually started a long time ago.

According to National Development Council (NDC) figures, Taiwanese women have not been giving birth at the replacement rate of 2.1 children per woman since 1984. Amid salary stagnation and the skyrocketing price of housing, the birth rate continues to fall. In 2003, it was 1.3 children per woman. By 2020, it had fallen to just 1.

In 2018, Taiwan officially became an aged society, meaning more than 14% of the population was above the age of 65. The island is on track to becoming super-aged, with an over-65 demographic comprising 20% of the population, by 2025. If current trends continue, 4 in 10 Taiwanese will be elderly by 2070.

“It is a good thing we got rich before we got old,” says economist Dachrahn Wu, director of National Central University’s Research Center for Taiwanese Economic Development.

An aging society generally spells economic disaster for any country. More than the absolute number of people, it is the demographic structure – the number of healthy working-age citizens versus the elderly and the infants that need to be supported – that generally determines the economic health and potential of a country.

“It’s true that we should work to reverse the aging trend, but it is not going to be easy,” Wu says.

Even if Taiwanese women miraculously started having more babies now, there would be a period in which dependents outnumber workers as it takes time to raise a child to working age. And while encouraging immigration might be used as a quick fix, Taiwan has traditionally been very resistant to that approach.

However, argues Wu, demography is not destiny. It is possible to decouple demographics from prosperity. In fact, Taiwan has already started doing just that.

“Notice that most of Taiwan’s export-oriented manufacturers have offshored,” Wu says. “This means that Taiwan companies can benefit from young workers abroad – first in China, then increasingly in Vietnam, India, and other countries where they still have a more favorable demographic structure and cheap wages.”

So far, offshoring has helped Taiwan avoid the worst effects of demographic change. In 2020, Taiwan’s GDP grew by 2.98%, outpacing China’s (which grew by 2.3% in the same period) for the first time in three decades. The Chung-Hua Institution for Economic Research expects Taiwan’s GDP to grow again this year, by 5.16%.

In fact, China may be facing an even bigger demographic challenge, says Wu. “As in Taiwan, Chinese women are increasingly reluctant to have kids,” he says. “However, they are still in the process of maturing their economy.” Such a conundrum could make China’s “demographic time bomb” far harder to defuse, he says.

While the trend of companies offshoring from Taiwan is set to continue, for Taiwan to truly remain a prosperous country as it ages, a more fundamental transition is necessary: that of its education system.

“The old way of education is a stumbling block to Taiwan leveling up to an advanced knowledge economy,” says Wu. “Our students are still taught in a way that curbs their creativity, but that is exactly the kind of skill that is badly needed for them to be super-productive in the economy of the future.”

However, Wu says that though it is theoretically possible to separate economic growth from the health of the demographic base, Taiwan is wading into unknown territory. Japan, which started aging a few years ahead of Taiwan, has managed to remain wealthy but has not been able to sustain robust growth.

While noting that “there is no one single solution,” Wu suggests looking to Singapore for an alternative approach. The small-sized Southeast Asian powerhouse also suffers from anemic birth rates, barely above those of Taiwan. Yet it has filled the workforce gap with a massive dual-tiered foreign labor system: one tier for temporary migrant labor and another for highly skilled foreign labor with a pathway to citizenship.

Tammy Turner, an American environmental activist and translator who has worked extensively for large Taiwanese clients, including government departments responsible for encouraging investment and trade, disagrees that Taiwan can – or should – continue to look to GDP growth as the sole metric for growing prosperity.

“They are measuring the wrong thing,” she says. “Taiwan is getting wealthier, but that is not the experience for most Taiwanese.

“While the rich get richer in Taiwan, there’s no hope for the young people,” says Turner. “The reward for their hard work is not proportionate.”

Wages in Taiwan have been stagnant for around two decades. Turner notes that this has contributed to Taiwan’s “brain drain,” in which young Taiwanese with marketable skills move to the U.S., Europe, China, Hong Kong, and Singapore in the pursuit of higher wages and a better quality of life.

The government’s goal to optimize the business environment in Taiwan for its export-driven industrial machine has raised the island’s top-line economic figures at the expense of actual happiness for the Taiwanese people, Turner argues. The environment also takes a back seat, further degrading Taiwan’s “actual” richness for another sliver of economic growth.

Through her work promoting permaculture – a holistic approach to ecologically sustainable land management – and urban re-wilding in Taiwan, Turner has worked with Taiwanese volunteers to create nine “pocket parks” – small parks built on irregular pieces of land – in Yonghe, one of the densest and least green districts of Greater Taipei. She’s also taught countless students how to grow food sustainably through her permaculture classes.

“People work so hard here and for so long, they don’t have time to actually connect and live, but there is a yearning for something different,” Turner says. She adds that employees of large Taiwanese enterprises like the Taiwan Semiconductor Manufacturing Co. join her classes to learn about permaculture.

Turner calls on the Taiwanese government to look to the “doughnut economy,” a sustainable development framework that considers everything from food security to social equity, while also ensuring that economic development doesn’t damage the environment.

Taiwan’s carbon intensity – the amount of greenhouse gases released to generate a unit of electrical power – is heavy. Eventually, the country will pay not just an ecological price, but its balance sheets will suffer as well, says Turner.

“We can’t do growth the way we used to,” she says. “The age of the working population is just one limiting factor.”

According to the NDC, Taiwan’s government has been using all means at its disposal to cushion the blow of the island’s aging population on the economy.

“The declining and aging population is a national challenge,” the NDC said in a statement provided to Taiwan Business TOPICS. “In order to ensure the stable growth of our economy, the government is in the process of planning our immigration policy for economic migrants, reaching out to key talent in critical industries, and filling up industries with technical talent from abroad.”

The NDC added that it plans to increase incentives for young talent from abroad to come to Taiwan to work and study. “In addition to providing the labor we need to develop, [this talent] will provide an additional source of population that will enable us to maintain a reasonable demographic structure,” it said.

While the policy is still in the planning stages, the NDC confirmed that it would aim to boost the number of long-term residents in Taiwan through the issuance of Alien Permanent Resident Certificates (APRC).

Yet some say that for Taiwan to better attract talent that will stay, it must offer a feasible path to full citizenship. Despite the fact that Turner has been in Taiwan since 1986 and calls the island her home, she is not a citizen of Taiwan because she is unwilling to give up her U.S. citizenship, a precondition in most cases to becoming naturalized in Taiwan. “It’s a missed opportunity for Taiwan to attract healthy recognition,” she says.

According to the NDC, an APRC gives its holder all the rights and privileges afforded to Taiwanese citizens except for two: voting and serving in the military. Turner says that this doesn’t accord with some of the things she’s observed.

“I know people who were threatened with deportation for participating in the Sunflower sit-ins,” she says, referring to large protests that took place against a proposed cross-Strait services agreement in 2014. “And I’ve heard of some APRC holders who were excluded from COVID relief programs.”

A foreign resident from the U.S. who asked to go by the pseudonym Jennifer has lived in Taiwan for eight years. She is married to a Taiwanese national, and the couple hopes to have children soon, with help from Taiwan’s state-supported in vitro fertilization program. If successful, she will be the only member of her nuclear family who is not Taiwanese.

“No matter how many roots I put down here, I’ll still be both socially and legally considered a foreigner, and to change that, I’d have to give up citizenship in the country my own family lives in,” she says. “I love Taiwan, but that’s just not a tie I’m willing to break.” 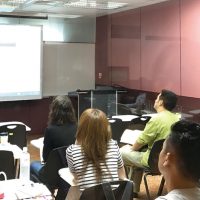