Taiwan COVID-19 Update: The Bright and the Bleak

The COVID-19 outbreak in Taiwan is slowly being brought under control as the island enters its fourth week of Level 3 restrictions. Daily confirmed cases remain in the triple digits but appear to be declining.

A donation from Japan of 1.24 million doses of the AstraZeneca vaccine arrived in Taiwan on June 4. It was the first time Japan directly supplied vaccines overseas. The shipment comes at just the right time for Taiwan, which is in desperate need of vaccines as the government has struggled to control the community infection and only around 6% of the population is vaccinated. In addition to this donation, Japan will continue to provide vaccines to Taiwan in batches. However, both parties have yet to agree on the total number.

As the pandemic situation is still quite severe, Premier Su Tseng-chang on June 7 approved an extension of the national Level 3 alert to June 28. As a result, schools at all levels across Taiwan have suspended in-person classes until the summer holiday.

Medigen Vaccine Biologics Corp (Medigen) announced on June 10 that its locally produced MVC-COV1901 vaccine had successfully completed Phase II clinical trials. The company said it would apply for Emergency Use Authorization (EUA) from Taiwan’s Food and Drug Administration soon and would aim to start supplying the vaccine domestically in the second half of this year.

President Tsai Ing-wen has stated several times that Taiwan-made vaccines will be available by July. The government has also signed agreements with Medigen and another Taiwanese firm, United Biologics Inc., to purchase a total of 10 million doses. Medigen said that after obtaining the EUA, they could begin distributing their vaccine as early as July.

Since the beginning of this year, Medigen has recruited more than 4,000 volunteers from 11 hospitals in Taipei for clinical trials of its vaccine, exceeding the company’s original goal of 3,700 participants, as well as the number of subjects recommended to receive EUA by the Ministry of Health and Welfare.

However, the government has repeatedly stressed that administering the vaccine is an urgent matter and has opted to provide EUA after the successful completion of Phase II trials. This decision has caused significant public controversy.

In addition, obtaining an internationally recognized vaccine passport for vaccines that have not undergone Phase III clinical trials would likely be difficult, and those who receive the Medigen jab before it is fully authorized may not be able to travel abroad without being required to quarantine. For its part, Medigen stated that it has begun preparing to launch Phase III clinical trials in the Netherlands to obtain international approval, which would hopefully pave the way for its own vaccine passport.

The severity of the mid-May COVID-19 outbreak in Taiwan has resulted in partial lockdowns in Taipei and New Taipei Cities. Fortunately, industries have responded quickly, and the economic losses are still controllable. Although domestic consumption has declined significantly, the effect on Taiwan’s GDP is relatively small. In fact, Taiwan could still experience economic growth of 5% or more this year.

Employee wages have been rising as well. On June 10, Taiwan’s Directorate General of Budget, Accounting, and Statistics (DGBAS) reported that average regular earnings of full-time employees in April was NT$43,190, up 2.77% year-on-year. Average total earnings, which includes irregular payments such as bonuses and overtime pay, was NT$49,930, an increase of 4.27% from the same period last year.

Yet given the rapid rise in confirmed COVID-19 cases in May, DGBAS officials say the impact on the labor market may be greater than last year, with domestic consumption suffering the most. Industries most affected by the pandemic include hospitality and catering, tourism, arts and entertainment, and private transportation, said the DGBAS.

Nevertheless, Taiwan’s stock market is booming, and speculative sentiment is rising. Like in other countries around the world, Taiwan stocks have been relatively unaffected by the pandemic’s worsening and the market continues to experience a strong rebound from the dip it took in early May when local cases began surging.

Two major developments in Taiwan’s relations with the U.S. occurred in the first half of this month.

That same week, U.S. Secretary of State Antony Blinken was asked about the Biden Administration’s position on trade with Taiwan after President Tsai lifted a longtime ban on imports of U.S. pork containing the feed additive ractopamine. Blinken responded that conversations between the U.S. and Taiwan about “some sort of framework agreement…should be starting.” He referred any other questions about the matter to U.S. Trade Representative Katherine Tai.

Tai and Taiwan’s chief trade negotiator John Deng met virtually on June 10. During the meeting, the two sides agreed to convene the 11th U.S.-Taiwan Trade and Investment Framework Agreement (TIFA) council in the coming weeks. “TIFA talks” began with the signing of the agreement in 1994 and have generally been held around once a year, alternating between Taipei and Washington. However, no such session has taken place since October 2016.

American Institute in Taiwan (AIT) Director Brent Christensen wrote on Facebook that resuming the TIFA talks would allow the U.S. and Taiwan to “further deepen our collaboration on supply chains, investments, and a worker-focused trade policy.” 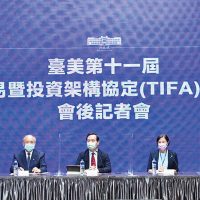