Taiwan has a relatively complete supply chain for electric vehicle components, and companies such as Tesla rely heavily on Taiwanese suppliers for a majority of their EV parts. Yet the island has not produced a viable EV brand to contend in the global market.

“If you’re looking for components for a gasoline car, you had go-to suppliers,” says Tucker. “But for a lot of the EV components, there was no existing supply chain.”

What Tesla’s team found in Taiwan were highly adaptable small and medium-sized businesses that were able to make the parts to Tesla’s specifications.

“It was a great match between volume, quality, and flexibility,” Tucker says. “Tesla set up a motor factory in 2008 and through that factory we were able to source a lot more components from there on out.”

When it debuted in 2008, the Roadster contained around 30-40% Taiwanese components.

Today Taiwan is a more integral part of the global EV supply chain than ever. Companies such as Chang Chun Group, a petrochemical conglomerate that produces copper foils for lithium-ion batteries, and Hota Industrial Manufacturing Co., the sole supplier of reduction gears to Tesla, are struggling to keep up with burgeoning demand.

According to Annie Shih, a deputy division director at the Industrial Technology Research Institute (ITRI), more than 11 million EVs will be on the road worldwide by 2025. The Biden administration has taken bold moves to improve the charging infrastructure for EVs, investing US$2 billion to build 500,000 charging locations. Germany plans to build a million public charging stations and make EV charging available at all gas stations. U.S. car manufacturer General Motors says it aspires to produce only electric vehicles by 2035.

“This is a policy-driven trend,” says Shih, who specializes in automobile electronics. “Last year there were 1.2 million EVs sold in China and 1.4 million sold in Europe. We are seeing the beginning of a global EV boom.”

As global demand for EVs is projected to rise sharply, Taiwan’s place as a component supplier seems assured. But more and more people are starting to ask whether it’s possible for Taiwan to do more than supply components to foreign EV makers. If so many of the components and key technologies used in modern EVs come from Taiwan, why isn’t there a “Taiwanese Tesla” that can put the whole car together?

There are certainly opportunities for Taiwan to play a role beyond supplying components, says Shih, who cites the developing trend toward integrating hardware and software in different aspects of the EV.

“The whole electric car is changing,” she says. “There is tremendous innovation with the chassis that can lead to the development of embedding the software in the hardware to create a seamless in-vehicle human-machine interface (HMI).”

Taiwan’s traditional strengths in the Information Communication Technology (ICT) industry means Taiwanese companies are well-suited to incorporate “smart” features into every part of the car. “Even a power module has to be smart,” says Shih, referring to the electronic component that houses the semiconductor devices powering different parts of the vehicle.

If Tesla is the Apple of EVs, Taiwan’s Hon Hai Precision Industry Co. is attempting to become the Android with its MIH open platform for EV development. Launched in October last year, the platform, which has attracted more than 1,000 companies to join, provides a standard through which different component makers can collaborate.

In February, Hon Hai announced plans to partner with EV maker Fisker, another California-based startup. Shih of ITRI says that such international collaborations are the key to success for Taiwanese EVs.

“Our market is not so large,” she notes. “There’s a need to work with international brands to access international markets.” However, this does not mean that purely domestic EV brands cannot prosper.

One advantage that Taiwan has in being small is the ability to develop a comprehensive EV charging infrastructure. “We have a population density of 649 people per square kilometer here in Taiwan,” says Shih. “Compared to America, it’s much easier to cover the island in a complete network of charging stations.”

As an example, Huang points to Vietnam’s Vinfast. “They launched as a car company just three years ago and focused on EVs with an eye to the export market,” he says. “They’ve already received permission to test self-driving cars in California.”

In fact, Huang says, it is imperative for Taiwan to come up with its own brand, and time is of the essence.

“Without our own EV brand, we do not have a voice in the international market,” he says, estimating that Taiwan has about three years to “seize this opportunity.” Huang notes that around 500,000 cars are currently sold on the domestic market annually, and that given the correct government policy direction, 100,000 of those could be EVs – enough to support a domestic brand.

The importance of such a brand, argues Huang, is that it would complete the Taiwanese EV supply chain, demonstrating that Taiwan has the ability to offer the most complete solutions for any company seeking to build an EV.

To that end, TAITRA is holding the first 2035 E-Mobility Taiwan Show in October. The “2035” in that title alludes to the year many markets plan to phase out fossil fuel vehicles. By bringing together Taiwanese EV suppliers and international car companies and suppliers, Huang hopes to catalyze the process of consolidating the island’s EV supply chain into a Taiwanese EV one-stop shop.

“Taiwan has the hardware supply chain and the software capability,” Huang says. “It’s time to combine the two.” He suggests that Taiwan begin sourcing batteries from business partners Korea and China, while simultaneously moving on to producing systems.

The Taiwanese EV supply chain has progressed from making components to making subsystems, says Huang. This means putting parts into complete modules such as the drive train or the suspension. The more complete the solution, the higher the value manufacturers can generate. Put those systems together, and you’ve just made an electric car.

Huang points to the growing number of tech companies designing their own EVs, noting that in the future many more such companies will lack their own production facilities. A would-be EV company could simply come to Taiwan and order subsystems off a menu, he says.

If Taiwan is really poised to become an EV one-stop shop, why hasn’t a strong Taiwanese EV brand yet emerged?

“I think it’s because the Taiwanese are too mild, too good, too polite, too thrifty, too accommodating,” says Huang. “We’ve got the skill; we just lack the will.” He urges companies to come together to make Taiwan the “world’s EV solution provider.”

Putting in the effort

Taiwan’s success in the EV supply chain was far from an accident. Companies such as Delta Electronics, the nation’s leading power and thermal management solutions provider, have been hard at work ever since Tesla came calling, even if it meant continuous losses in the early years.

“A decade ago, the perception was that the Tesla is a rich man’s toy, but the market has finally matured,” says Huang. “Delta quietly toiled for more than a decade, but their EV department didn’t start making money until last year.”

Now that Delta’s perseverance has paid off, the rewards are only going to multiply in the coming years. The company estimates it will capture 10% of the US$3 billion total available market in power and traction components for EVs this year. By 2030, that global market is estimated to grow to US$33 billion a year, and Delta aims to maintain that 10% share.

After leaving Tesla in 2012, Azizi Tucker decided to stay in Taiwan and start his own EV business. He is now the chief technical officer of XING Mobility, a maker of drive train subsystems for niche EVs.

“You say ‘niche,’ but it’s a very large market – twice as big as for passenger cars,” says Tucker. “A niche EV can be anything from a garbage truck to a 2-kilogram AGV (automatic guided vehicle).”

Tucker says that XING Mobility is mulling whether to join the MIH alliance. In the meantime, he sees both potential and pitfalls in Taiwan’s EV future.

“The potential is large, but companies are moving too slowly,” says Tucker. “They’re waiting for orders rather than generating products.” This approach could cause potential clientele to look elsewhere, he says.

“Customers are not experts in EV. They don’t know what to order. They don’t even know what’s technically possible.”

Ironically, in order for Taiwan to succeed as an EV powerhouse, it needs to embrace failure, says Tucker. “We need to build a tolerance for failure. Pick a couple of safe bets and be experimental with the rest,” he says. “This is a mindset shift that needs to happen.” 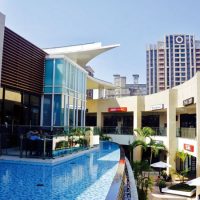