The inaugural U.S.-Taiwan Economic Prosperity Dialogue (EPP) was held in mid-November. The nine-hour talks took place both virtually and through physical meetings in Washington, D.C. and culminated in a five-year memorandum of understanding between the two sides.

Among the topics discussed during the EPP were bilateral economic cooperation in the areas of medicine, technology, supply chains, and energy. Given the complementarity of the two partners’ ICT industries, as well as the Taiwan Semiconductor Manufacturing Co. (TSMC) project to establish a 12-inch fab in Arizona with an initial investment of US$3.5 billion, a particular focus of the talks was how to deepen cooperation on semiconductor design and production.

Leading the small in-person Taiwan delegation to the EPP was Deputy Minister of Economic Affairs Chen Chern-chyi, who was joined in Washington by Taiwan’s representative to the U.S., Hsiao Bi-khim. Minister of Economic Affairs Wang Mei-hua, Minister without Portfolio John Deng, and Minister of Science and Technology Wu Tsung-tsong joined via teleconference, as did American Institute in Taiwan Director Brent Christensen. The discussion was led by Undersecretary of State for Economic Growth, Energy and the Environment Keith Krach, who in August became the highest-level U.S. State Department official to visit Taiwan in four decades.

While the EPP and resulting MOU are considered positive steps toward strengthening U.S.-Taiwan ties, they are unrelated to Taiwan’s goal of concluding a bilateral trade agreement (BTA) with the U.S., as trade negotiations are the purview of the Office of the U.S. Trade Representative (USTR).

While the Tsai administration’s recent decision to lift the longstanding import ban on U.S. pork containing the feed additive ractopamine will remove one of the last major obstacles to restarting trade talks between Taiwan and the U.S., the USTR has yet to issue a public statement acknowledging the move. However, John Deng indicated that such issues would be discussed at restarted Trade and Investment Framework Agreement (TIFA) talks, which have not been held since 2017.

Taiwan’s representative to the U.S., Hsiao Bi-khim, spoke with Antony Blinken, then a senior advisor to U.S. president-elect Joe Biden, over the phone in November. Blinken has since been nominated by Biden to be the next U.S. Secretary of State. Hsiao says that during the call, she conveyed a congratulatory message to Biden on his election victory. She also expressed hope that the U.S. and Taiwan can continue their close cooperation, emphasizing that the “close and enduring” ties between the two are based on shared values and common interests.

During the Obama administration, Blinken served as National Security Advisor to then Vice President Biden and later Deputy Secretary of State. He is seen by the foreign policy community as more predictable than the current Secretary, Mike Pompeo, whose tenure has been marked by an openly confrontational stance toward China.

Douglas Paal, a former director of AIT, said that as Secretary of State, Blinken would value “Taiwan’s positive role in the global economic, political and health system.” Taiwan’s Deputy Minister of Foreign Affairs, Harry Ho-jen Tseng, described the call between Blinken and Hsiao as positive and said he does not expect Taiwan-U.S. ties to change significantly under the Biden administration.

Taiwan Excluded From WHO Meeting

Despite having gone over seven months without a local COVID-19 infection, Taiwan is still being excluded from meetings of the World Health Organization’s decision-making body, the World Health Assembly. Due to pressure from China, which attempts to limit Taiwan’s participation in international organizations that require statehood, Taiwan was not invited to the assembly’s annual meeting this November.

Responding to the WHO’s rejection of Taiwan, over 1,700 government officials and organizations, including the World Medical Association, the African Formosa Club, and the European Parliament, expressed support for Taiwan’s participation. President Tsai and other Taiwan officials thanked those lobbying for Taiwan at the meeting, saying that Taiwan will continue its efforts to join in the future.

The WHO’s social media was also bombarded with messages of support for Taiwan. Its moderators responded by temporarily blocking mention of the words “Taiwan” and “China,” prompting an outcry from internet users. The WHO defended the move in a statement, saying that it was a “practical measure” to prevent “cyberattacks by online activists,” and that it did “not reflect a value judgment or any policy of the World Health Organization.” It added that it has since removed the filters.

Morris Chang, retired founder of TSMC, was chosen to attend the leaders’ meeting of this year’s Asia Pacific Economic Cooperation (APEC) forum on behalf of President Tsai Ing-wen. It was Chang’s third time to be named as Taiwan’s representative to the summit, which was hosted in Malaysia but took place virtually due to the COVID-19 pandemic.

During the meeting on November 20, Chang shared with other virtual attendees how Taiwan successfully managed the pandemic by embracing the power of digital technology. He noted that Taiwan has recorded only 611 coronavirus cases and seven deaths since the initial outbreak in late December 2019. In addition, its popular stimulus programs have helped spur consumer activity and kept the island’s economy on a growth track.

Chang emphasized the importance of Taiwan’s capabilities in semiconductor design and manufacturing, and said that Taiwan’s government and people are eager to share their expertise with other APEC members.

After the conference, Taiwan’s Presidential Office expressed Taiwan’s commitment to the Kuala Lumpur Declaration, which signals APEC leaders’ dedication to spurring economic recovery after the pandemic. Taiwan is also committed to helping carry out the APEC Putrajaya Vision 2040, the summit’s goal of achieving an open, dynamic, resilient, and peaceful Asia-Pacific community by 2040, the Presidential Office said. 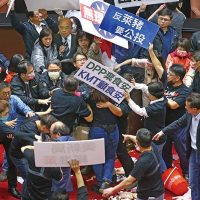