Excitement was in the air at the 2020 AmCham Taipei Annual General Meeting, held at the Shangri-La’s Far Eastern Plaza Hotel on November 17. As the Chamber’s signature year-end event, it would serve as the platform for announcing that AmCham Taipei would begin the formal process of becoming the more appropriately named American Chamber of Commerce in Taiwan in January 2021. To commemorate this momentous occasion, President Tsai Ing-wen delivered the keynote speech.

Newly elected for one-year terms as Supervisors were Max Chen of Facebook Taiwan, Shelley Chia of Deloitte and Touche, and Seraphim Ma of Baker McKenzie.

In brief opening remarks as the luncheon meeting began, American Institute in Taiwan Director W. Brent Christensen emphasized that regardless of the results of the recent U.S. elections, Taiwan continues to enjoy broad, bipartisan support in Washington. He also commended President Tsai for prioritizing transparency and safety in Taiwan, and for creating a “safe, stable environment, which has allowed Taiwan’s businesses to flourish in the face of strong global headwinds that are constraining growth in so many other economies.”

In her keynote speech, President Tsai congratulated the Chamber for successfully moving to change its name to AmCham Taiwan, which she said is “a true reflection of its membership.” She said that she believes the organization will “play a crucial and significant role in the development of Taiwan’s partnerships in the future.” She also spoke of Taiwan’s success in containing COVID-19 and its ability to maintain positive economic growth throughout the pandemic without needing to resort to lockdowns.

Lastly, President Tsai acknowledged the great recent strides made in the U.S.-Taiwan relationship, noting Taiwan’s importance as the U.S.’ ninth largest trading partner and 11th largest export market. She also cited the visit to Taiwan in September by Keith Krach, the U.S. Under Secretary of State for Economic Growth, Energy, and the Environment, and the resulting U.S.-Taiwan Economic Partnership Dialogue held between Taiwan officials and the State Department in Washington this month.

Also of significance at this year’s event was Chairperson CW Chin’s announcement that Don Shapiro, AmCham Taipei Senior Director and Editor-in-Chief of its Taiwan Business TOPICS magazine, would be retiring from his full-time position at the end of the year, while continuing in an advisory capacity. Chin and AmCham President Leo Seewald thanked Shapiro for his invaluable contributions to the Chamber and presented him with a commemorative plaque. 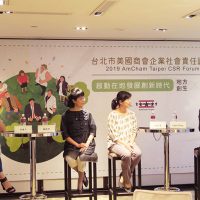 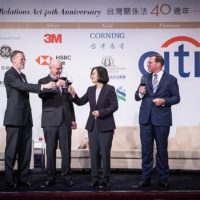 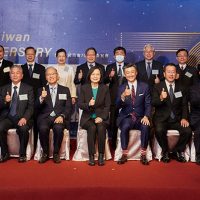