Taiwanese protesters calling on China to release the 12 Hong Kong activists arrested in August for trying to flee the territory for Taiwan. Photo: Martti Chen

An October 25 rally in Taipei supporting 12 Hong Kong activists who were arrested when trying to flee to Taiwan in August drew hundreds of participants from across the island. Dressed in black and carrying signs bearing the slogan “Save 12” and other messages of support, rally attendees marched from the Zhongxiao Fuxing MRT station in the city center to the Hong Kong Economic, Trade and Cultural Office in Taipei.

Rally organizers included the Taiwan Association for Human Rights, the Hong Kong Outlanders, and the Judicial Reform Foundation, while groups such as the Presbyterian Church in Taiwan and the Taiwan Tongzhi (LGTBQ+) Hotline Association were also represented at the march.

The protest movement in Hong Kong began in the summer of 2019 as a response to a now-shelved extradition bill, but eventually broadened to encompass calls for democratic reforms in the Asian financial hub. Momentum slowed in 2020 with the onset of the COVID-19 pandemic and Beijing’s imposition of a draconian security law.

While Taiwan authorities have continuously expressed support for and solidarity with protesters in Hong Kong, the government has yet to pass a refugee law to accommodate the growing number of activists looking for safe harbor on the island.

The new packages come very shortly after the US$8 billion sale of F-16V fighter jets made in August, the first sale of new fighter aircraft to Taiwan since 1992 and part of a pattern of increased defensive arms deals with Taiwan under the Trump administration. It is yet another sign of the U.S. government’s increasingly supportive stance toward Taiwan’s security in light of a more aggressive Chinese posture in the Taiwan Strait and worsening U.S.-China ties.

Among the several pro-Taiwan figures in the Trump administration is National Security Advisor Robert O’Brien, who in a recent speech at the Aspen Institute advised Taiwan to begin bolstering its military defenses in case of an “amphibious invasion or even a gray zone operation against them.” Others, such as Vice President Mike Pence, Secretary of State Mike Pompeo, and Commerce Secretary Wilbur Ross, have made public declarations of support for Taiwan.

The greater focus placed on Taiwan by high-level officials in the Trump administration is not lost on Taiwanese. According to a survey administered in Taiwan by the UK-based market research firm YouGov, over 40% of respondents said they would favor a Trump presidency, while 30% said they would prefer his Democratic contender, Joe Biden. Those who chose Trump said they did so because they thought he would be more likely to continue strengthening the U.S.-Taiwan relationship.

A Double Ten National Day event organized by the Taiwan representative office on the Pacific island of Fiji turned sour when it was gatecrashed by two Chinese embassy staff.

Taiwan’s Ministry of Foreign Affairs (MOFA) reported that the diplomats tried to force their way into the venue where the event was being held to take pictures and collect information on those attending. A scuffle ensued when event organizers moved to block them from entering, resulting in injuries to members of the Taiwanese staff. One was said to require hospitalization.

The Chinese Embassy in Fiji refuted MOFA’s characterization of the incident, stating that its personnel were simply carrying out their official duties at the site, but were provoked by the Taiwanese staff. Chinese officials also took aim at the event itself, saying that it violated Fiji’s “one-China principle and relevant rules and regulations.” 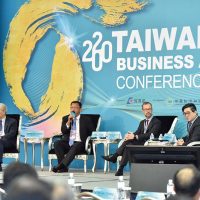