E-learning startups cater to rising demand for online self-learning among individuals. These firms can support the public sector and businesses, too.

Taiwan has controlled the coronavirus pandemic so well that its K-12 schools have been able to maintain classroom instruction. The only interruption to school came in February, when the government delayed the start of the spring semester by two weeks as a precautionary measure.

For Taiwanese children and their families, safely maintaining classroom instruction during the worst pandemic in a century is a boon. Children’s educations have not been compromised, while their parents have been able to continue their regular work schedules.

Concerns exist, though. If remote learning becomes a larger part of education in the future, Taiwan may be at a disadvantage. “Maybe we’re not at the forefront [of remote learning] because we haven’t needed to be,” says Richard DeVries, managing director of Taipei-based Geber Brand Consulting and the father of two children in Taipei’s public-school system.

That’s where Taiwan’s online learning startups come in. Many cater to adults learning independently online, but they can also cooperate with businesses and the public sector.

In April, Taiwan’s government invited Hahow, a Taipei-based interdisciplinary online education platform, to co-produce a free 48-minute video course that explains in layman’s terms what the coronavirus is and how people can protect themselves from it. Former Vice President Chen Chien-jen, an epidemiologist who led the crucial early stage of Taiwan’s fight against COVID-19, teaches the course. He speaks in Chinese, with subtitles in English.

The course was a big hit, attracting 20,000 new users to Hahow, says the company’s co-founder and CEO Arnold Chiang. “We want to show that learning can be very diverse,” he says. “It doesn’t have to be academic.”

Typically, Hahow’s content is paid, relying on crowdfunding to ensure that there is sufficient interest for a course. If at least 50 students are willing to pay for a given course, Hahow will produce it and make it available online. Chiang says that Hahow is the first company in Taiwan to combine online learning with crowdfunding.

Hahow has grown steadily on the back of its diverse course content, which teaches everything from presentation skills and how to apply for a job overseas to balloon art and drawing cartoons. Courses are taught by non-traditional instructors with expertise in the respective course areas. The company earned US$5.5 million in revenue last year and expects further growth in 2020.

In Hahow’s courses, “Taiwanese can discover what interests them and what they are good at,” Chiang says, Because of Taiwan’s conservative education system, which is laser-focused on achieving high test scores, “many Taiwanese don’t know what they like.”

While Hahow has grown during the pandemic, competition is intensifying. Chiang says that since February, two or three new e-learning companies have been set up in Taiwan every month.

Johnny Tsai, co-founder and CEO of VoiceTube, an e-learning platform that uses YouTube videos for instruction, says that his company’s sales are up about 20% annually, compared to 200% a year earlier. Amid tougher competition, VoiceTube’s user acquisition costs have tripled as measured by spending on search engine optimization, advertising, and social media.

Established in 2013, VoiceTube initially focused on online English-language instruction. Recently, it has diversified into other languages, business topics, and computer programming. VoiceTube has a library of 100,000 videos from which students can choose. An algorithm helps them select content best tailored to their interests.

This year, its best-selling courses have been the Vclass series taught by local influencers. VoiceTube co-produces content with the influencers and shares revenue with them. The courses focus on building practical English skills in a short period of time (typically 8 to 52 hours) and cover topics such as essential communication, grammar, and TOEIC vocabulary, as well as English used in business and the news media.

With more than three million users in Taiwan, VoiceTube has a solid local following. It has another 400,000 users in Japan, its largest international market. VoiceTube is also present in Hong Kong, Malaysia, and Vietnam.

Taiwanese schools have a much greater interest in online services now than before the pandemic, he says. “Taiwan was fortunate that it did not have to widely implement remote learning this time. But that day may come, and schools want to be prepared.”

Some of Taiwan’s universities did switch to remote learning for the spring semester. One of them was the College of Management at National Taiwan Normal University (NTNU). Hsu Mei, the college’s dean and an economics professor, told Taiwan Business TOPICS that the experience was instructive. Overall, she did not experience any major problems in her classes.

However, she felt that teaching remotely was less effective than in the classroom. “Normally, we have 60 to 80 students in a class, so it’s a challenge for a teacher to teach a class that size online,” she says. “Just monitoring all the students to make sure they’re paying attention is hard from behind a computer screen.”

Hsu found that compared to her in-class lectures, online students were less engaged with the course material. Grades were lower than usual during the spring semester.

NTNU did benefit from its considerable information technology resources, which enabled the school to smoothly set up the remote learning platforms, Hsu says. Rather than any inadequacy with the technology, she suspects that the problem was the inevitable learning curve for online education. Since Taiwanese students are generally unfamiliar with distance learning, this first time was bound to have some hiccups, she says.

Classroom instruction resumed in May, once the risk of COVID-19 community transmission was minimal. While everyone was glad to be back at school, Hsu discovered a new problem: Students’ classroom learning skills had atrophied.

“It was as if they were not used to learning in the classroom,” she says. “You don’t have to be as alert if you’re attending a class at home in front of a screen.”

Nevertheless, Hsu says she’s confident that NTNU and other universities could resume an all-remote learning program if circumstances required. “We have done a successful test run. We will be prepared for next time.” 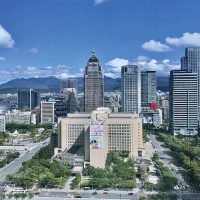