Taiwan’s travel and tourism industry felt the strong impact of travel restrictions in Q2, with both revenue and expenses falling to record lows since the government began collecting the data in 1984. Statistics released by Taiwan’s Central Bank in August show that between April and June, monthly travel income plunged from US$1.4 billion to US$94 million. The border controls imposed in mid-March caused outbound travel in the second quarter to fall by 98.9% to around 47,000, while inbound tourism plummeted by 99.6% to a dismal 13,000.

Other sectors appear to be faring somewhat better, as both global and domestic demand begin picking up again. Year-on-year, exports increased by 0.36% for the month of July and 0.49% for the January-July period. Imports declined by 6.78% from July 2019.

Reflecting the gradually improving situation for external trade, business sentiment among Taiwan’s manufacturers has also begun perking up. The manufacturing composite index produced by the Taiwan Institute for Economic Research increased 5.90 points to a total of 96.32 points in July, the highest level this year and the third month of consecutive growth. The construction and services indexes also increased, with the latter moving up 3.24 points to 95.14.

Retail sales in July swelled by 2.5% to NT$335.1 billion (US$11.36 billion), ending a five-month decline. The bump in sales was likely due in part to the government’s Triple Stimulus Voucher program launched at the beginning of the month. In addition, Taiwan’s Consumer Confidence Index, which tracks public confidence for the coming six months in areas such as consumer prices and the stock market, rose to 69.43 in July, up 0.66 points from a month earlier. 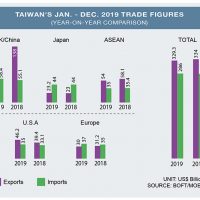