There is something about eastern Taiwan that brings out the best in artists. It may be the sheer sense of space and striking scenic beauty that inspires them. The mountainous counties of Hualien and Taitung are thinly populated by comparison with the island’s western lowlands, and life in the East moves at a much slower pace.

Very likely, the appeal is also connected to the region’s special multicultural makeup. In the East, every ethnic group is a minority. Many citizens are of Hoklo (Fujianese) or Hakka descent, and the distinctive Austronesian cultures of Taiwan’s indigenous tribes thrive in dozens of villages. Tens of thousands of other inhabitants have a parent or grandparent who arrived from mainland China in the late 1940s, and still others were born in Southeast Asia.

Since 2016, the government has been organizing and promoting the Taiwan East Coast Land Arts Festival (the TECLandArt Festival for short) to bring the artistic achievements of easterners to a wider audience, attract leading artists from home and overseas to the region, and give travelers yet another reason to spend time in this unspoiled corner of the world, The festival’s English-Chinese-Japanese website is at www.teclandart.tw.

To devise this year’s theme, the organizers drew on millions of years of geological history:  the ongoing collision between two tectonic plates – the Eurasian Plate on the western side and the Philippine Sea Plate to the east – that caused Taiwan and its awesomely rugged mountains to emerge.

From time to time, Taiwan’s inhabitants receive a reminder that, deep beneath their feet, immense natural forces push against one another. Here, as elsewhere along the Ring of Fire, occasional earth tremors are a fact of life. Like Japan, Taiwan has scores of hot springs – but the only active volcanoes are a handful of small yet beguiling cones that spew warm mud rather than red-hot lava.

Hualien and Taitung lie on the frontline of this tectonic convergence. The boundary between the two plates runs north-south through the East Rift Valley, also known as the Huatung Valley or the Longitudinal Valley. Whereas previous editions of the TECLandArt Festival concentrated on the ocean and the coastal area, the 2020 event is extending its focus to this valley, which is separated from the Pacific Ocean by a mountain range that reaches 1,680 meters (5,512 feet) above sea level.

Noting that the violent collision of the tectonic plates “reveals infinite creativity and possibilities,” the organizers say “it is time to use this metaphor to integrate the infinite humanistic and artistic energy of the east coast and the East Rift Valley to bring about a comprehensive mountain-ocean dialogue.”

One of the most popular elements of the festival since 2017 has been the Moonlight Sea Concert. This year, the concert includes musical performances on August 4, 5, and 6; September 3, 4, and 5; and October 2, 3, and 4.

Musicians, dancers, and others whose art and ethos embrace and reflect the themes of the festival have been invited to perform. The range of genres is extremely broad: Whatever your preferences, you are sure to find something that delights your eyes and ears.

For international visitors, the Moonlight Sea Concert is an opportunity to see artists who seldom perform outside Taiwan. ZenKwun is a six-piece band that overlays Western rock beats with traditional Chinese instruments like the erhu, guqin, and suona. Yokuy Utaw is a member of the indigenous Atayal tribe from Taiwan’s northwest, but she sings Mandarin ballads and soft pop. The Skaraoke Jazz Orchestra is a brass-dominated swing ensemble.

The main concert venue is an outdoor stage at the Torik Visitor Center, an hour’s drive north of Taitung City. A stone’s throw from the visitor center, the Amis Folk Center hosts regular performances of Amis folk music and dancing throughout the year. The 214,000-strong Amis people is the largest of Taiwan’s 16 recognized indigenous ethnic groups.

Among the artists showcasing important works this year is Ou Zhou, also known as Nogdup. Ou, an ethnic Tibetan who was born in Nepal and trained as an architect in Taiwan, is contributing a piece he calls “New Island/Ancient Soul.” Composed of bamboo, driftwood, metal, and items retrieved from the coast, it was directly inspired by the tectonic clash that shapes Taiwan’s eastern region.

Installation artist Chou Hsueh-han’s “Soga Monster” meditates on the damage humanity has wrought on the environment. Lamenting the disappearance of the fireflies and fish he remembers seeing around his childhood home, his work explores the relationship between society and the materials it uses and discards. “Soga” is the Taiwanese pronunciation of “plastic.”

The huge work “Change” is a co-creation by Lua Rivera from Mexico and Lee Kuei-chih from Yunlin in southern Taiwan. The “change” in question is climate change, and the work seeks to underscore the importance of environmental sustainability.

“Trashion” is another exciting dimension of the 2020 TECLandArt Festival. This portmanteau combines the words “trash” and “fashion,” and refers to the creation of useful and/or beautiful items using discarded materials.

The festival’s Trashion contest is asking artisans and artists to design and make garments and other wearables that reflect both local and multicultural themes. Almost any kind of repurposed or recycled material can be used. Contestants who pass the first selection round will join workshops on August 9 and 10, while the final runway show and award ceremony are scheduled for October 4.

The current restrictions on international visitors may not be lifted in time for them to attend this year’s festival, but it is not too early to start making arrangements for 2021. Researching attractions on the eastern half of the island is easy, thanks to an abundance of multilingual resources.

Back issues of Travel in Taiwan, a bimonthly English-language magazine backed by Taiwan’s Tourism Bureau, can be read online at https://issuu.com/. For all kinds of travel information about the country, visit the Tourism Bureau’s website, or call the 24-hour tourist information hotline 0800-011-765 (toll free within Taiwan). 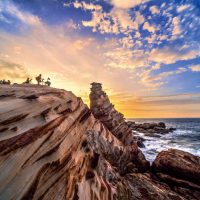 Modest Progress for Trade & Retail Taiwan’s travel and tourism industry felt the strong impact of travel restrictions in Q2, with both revenue and expenses...