A sharp decline in the number of cross-Strait flights and foreign visitors has left Taiwan’s tourism industry scrambling to figure out ways to cope with the sudden drop in business.

The recent COVID-19 outbreak is causing unprecedented economic disruptions throughout East Asia and beyond. While some Taiwanese and international companies with production bases in China are looking for possible alternatives, rerouting some or all of their operations either back home or to other locations in the region, the industry experiencing the most immediate direct hit from the outbreak is travel and tourism.

Although all members of this sector are feeling the pinch, airlines have been particularly hard hit. As of mid-February, cross-Strait flights, as well as those between Taiwan and Hong Kong and Macau, have reportedly decreased by 70%, and passenger traffic on these routes has dropped by 80%. Most recently, Taiwan’s EVA Air announced it would be cancelling newly planned direct flights to Milan, Italy and Phuket, Thailand due to concerns about the spread of coronavirus in those destinations.

To confront the negative effects of the COVID-19 outbreak on business, Taiwan’s other major carrier, China Airlines, has resorted to cutting the salary of its managerial personnel by 10% and has encouraged cabin crews to take three weeks of unpaid leave on a rolling basis between March and June. Both China Airlines and EVA have asked new recruits to hold off on reporting for work until further notice.

One flight attendant, who asked to be identified only as Stella, said that on a recent trip back from Hong Kong, what normally would be a fully packed flight carried a mere three passengers. She noted that she is no longer receiving assignments for short-distance cross-Strait and Hong Kong flights, which ordinarily constitute a substantial portion of her schedule.

Taiwan travel agencies have forced around one-third of their staff to take unpaid leave, says MyTaiwanTour CEO Michael Wu, citing a steep decline in business. All of his company’s tours have been canceled over the past few weeks, and website traffic has declined by 40%. The blanket restriction on cruise ships calling in Taiwanese ports following the Diamond Princess disaster in Japan dealt a further blow to travel agencies. MyTaiwanTour has suspended the several day tours specifically tailored to cruise passengers that it usually offers.

Outbound tourism is also suffering. Japan is normally a prime destination for Taiwanese travelers, but given the severity of the outbreak there, travel agencies have received cancellation requests for almost half of their Japan tours booked for the near future. This creates a difficult situation for these companies, as many of the destinations included in the tours remain open to visitors and the flight tickets are non-refundable.

“We don’t think business will recover until the fourth quarter this year,” says MyTaiwanTour’s Wu. “We have been discussing this in our industry, and the future doesn’t look bright right now.”

Taiwan’s hoteliers are experiencing similar declines in business. “We are seeing a downturn of around 60% to 70% in terms of increased vacancies in the coming months,” says Achim von Hake, general manager of luxury hotel The Sherwood Taipei. “That goes for most hotel operators around the island as well.”

Large hotels like The Sherwood rely heavily on income related to MICE events (Meetings, Incentive, Conferences, and Exhibitions), and von Hake notes that these are experiencing a similar rate of postponement and cancellation for the months of February and March. He emphasizes that given the special nature of the current situation, full refunds of deposits or pre-payments are given unconditionally.

The coronavirus crisis is only the most recent challenge to Taiwan’s resilient tourism industry. Travel from China had already dropped significantly over the past few years, starting with the PRC government’s placement of limitations on group travel in 2016. Last year, Beijing stepped up the pressure – a reaction to the Taiwan government’s refusal to accept the principle of One China – by ending a policy that had allowed independent travelers from 39 cities across China to visit Taiwan. The result was a 60% drop in tourist arrivals from China the following month.

However, tourism from other countries reached all-time highs in the intervening years, largely due to relaxed visa requirements for travelers from Southeast Asian countries under the Tsai Administration’s New Southbound Policy. In 2019, the number of foreign visitors to Taiwan reached a record 11.84 million.

Now the rapid spread of COVID-19 to countries around the region is certain to curb travel between Taiwan and those neighboring markets.

Exacerbating the problem has been confusion over Taiwan’s political status, especially in light of the World Health Organization’s misreporting of the number of confirmed cases in Taiwan in early February. This blunder was amplified by WHO’s decision to change the way it designates Taiwan in official announcements four times in a two-week period, likely under pressure from China. It eventually settled on the convoluted “Taipei and Environs.”

In addition, countries such as Italy, the Philippines, and Mongolia have lumped Taiwan in with the PRC in their bans on flights to and from China (Vietnam initially banned flights from Taiwan as well, but quickly reversed that step after Taiwan’s foreign ministry intervened). Given these developments, many travelers, trying to sift through incomplete or inaccurate information, might assume that Taiwan is indeed administered by the PRC and that travel to Taiwan is as unsafe as going to affected areas in China.

To combat such misunderstandings, MyTaiwanTour has posted content on its online media platform, taiwan-scene.com, informing potential travelers of the differences between Taiwan and China, and educating them on how to keep safe while traveling in Taiwan while COVID-19 remains a threat.

Their efforts have yet to see much success, however, as cancellations from overseas travelers continue to occur. “I think this might be happening not just because people are worried about flying to Asia, but because they’re worried about taking a plane anywhere right now,” says Michael Wu.

Although unpaid furloughs are the coping mechanism of choice during a lull in business like the current one, some in the industry are using the downtime to improve their service capability through staff training.

“We’re conducting internal training by department, as well as across departments, and doing training through third parties,” says The Sherwood’s von Hake. “We are also going through an upgrade of any area we can, such as our room products and restaurants, and making sure everything is spot on.”

Wu says MyTaiwanTour is investing in similar training for its tour guides, anticipating a healthy comeback when fears about the virus begin to taper off.

Although many local events are being postponed or cancelled, hotels – unlike some other businesses that rely heavily on foreign tourism – have the partial buffer of a domestic market to help carry them through this difficult period. This factor has allowed some hotels to request that staff first take any unused paid annual or compensatory leave, rather than force them to take unpaid personal leave.

In addition, members of the domestic hospitality industry are trying to organize discount programs to encourage employees to use the slack time to travel within Taiwan.

“I think this makes sense,” von Hake says. “This kind of educational travel could bring the whole service industry to a higher level in terms of service quality and product knowledge.”

Another challenge for hotels stems from the government’s announced policy requiring travelers who have stayed in or transited through affected areas to sequester themselves for 14 days after arriving in Taiwan. Those for whom Taiwan is a home base are generally able to find a place to wait out their quarantine, but most tourists will either have to rely on the government to provide makeshift accommodation or find hotels willing to house them.

Von Hake says that most hotel operators are refusing to accommodate quarantined travelers because of the difficulty of protecting staff and regular hotel guests from potential transmission of the virus. They would need to devise a system for the delivery of essential items such as food, personal care items, and fresh towels and sheets, but would also have to consider the mental health of guests isolated in the small, enclosed area of a hotel room for two weeks.

Given cabin crews’ close proximity to potential carriers of the virus, Taiwan’s airlines are enforcing the mandatory use by crew members of surgical masks, as well as gloves for handling food and food waste, on flights to and from high-risk locations.

Stella, the airline employee interviewed for this story, says that her company has recommended expansion of the above preventive measures to all flights, although their application is optional on trips to locations outside China. She says that for overnight flights to most destinations, one set of crew members is now on duty for the journey out, while another set takes over for the journey back, to ensure that everyone gets adequate rest.

While visitors coming from China, Hong Kong, or Macau are required to comply with the policy upon arrival in Taiwan, cabin and flight crew on those routes are exempt, and they are not being tested for the virus if they don’t present any obvious symptoms. Rather, they simply have their temperature taken upon their return. “Since we never get off the plane in those destinations, the quarantine rule doesn’t apply to us,” says Stella.

Meanwhile, some industry members are asking the government to give more serious attention to issues the travel sector has raised in the past, through venues such as AmCham Taipei’s annual Taiwan White Paper, in order to be better prepared for when tourist levels return to normal.

One important step, says Michael Wu of MyTaiwanTour, would be continuing to make Taiwan more English-friendly, which would benefit both foreign visitors and local partners. “We work with a lot of small, local communities in Taiwan, but right now they don’t yet have the capacity to accommodate foreigners,” he says. “So, this is a good time for the government to step in and determine what the big picture is for Taiwan’s tourism industry over the next few years.” 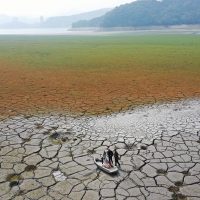 Kevin Chiang, president of Ever Rich Duty Free, has brought a lot of innovation and out-of-the-box thinking to helping run the company his father built....