Australian media on November 23 reported that a man claiming to be a former Chinese intelligence agent had defected to Australian authorities in October, requesting asylum there. Wang Liqiang, 23, whose wife and young child currently live in Australia, claims to have taken part in several espionage activities. These include funneling money from the Chinese government to the election campaign of then Kaohsiung City mayoral candidate Han Kuo-yu and participating in the kidnapping of five Hong Kong booksellers in 2015, as well as political interference operations in Hong Kong and Australia.

A day later, a number of media outfits reported on claims that a Chinese spy ring operating in Australia had attempted to plant a candidate in the country’s parliament. According to the allegations, Liberal Party member and luxury car dealer Bo “Nick” Zhao had been offered AUS$1 million by Chinese intelligence operatives to pay for his MP election campaign. Zhao was found dead in a Melbourne motel room this March after having disclosed the plot to Australia’s intelligence organization, ASIO, and identifying the man who had approached him about the deal.

On November 24, two of the key figures in Wang Liqiang’s allegations, China Innovation Investment Limited (CIIL) Executive Director Xiang Xin, and Kung Chin, a director of CIIL, were detained at Taiwan Taoyuan International Airport while trying to leave the island. Wang claimed that he had worked for five years infiltrating groups critical of China in Hong Kong and Taiwan under Xiang’s direction. The two executives remain in Taiwan for further questioning.

Responding to the stunning news reports, Shanghai police released a report indicating that Wang had been investigated and found guilty of fraud multiple times in China. English-language party mouthpiece the Global Times on November 27 released footage from October 2016 showing a man identified as Wang confessing to fraud and asking the court for leniency.

The PLA Navy on November 17 sailed a carrier group led by its domestically-built “Type 001A” aircraft carrier through the Taiwan Strait, the same day that incumbent presidential candidate Tsai Ing-wen picked William Lai as her running mate. While China claimed that the purpose of the voyage was “scientific research tests and routine training,” Foreign Minister Joseph Wu slammed it as an attempt by China to further intervene in the upcoming elections.

According to Taiwan’s defense ministry, Taiwan scrambled ships to monitor the movements of the fleet, which was also trailed by U.S. and Japanese vessels.

A Taiwanese tourist reported being detained by soldiers in China’s Inner Mongolia Autonomous Region on March 31 this year while he was on a cycling trip through the area. Tsao Yao-wen posted on Facebook that he was arrested, interrogated, and held in custody on the border of China and Mongolia for four days. He says the arresting soldiers confiscated his identification and travel documents, and forced him to show them all location history, chat data, and bank information on his cell phone. He notes that his captors asked him questions related to Taiwanese intelligence operations and where detained Chinese spies were being held in Taiwan.

Tsao says that when it became clear to his captors that he was merely a tourist, he was let go, but was forced to sign an affidavit stating that he had voluntarily cooperated with the interrogation. 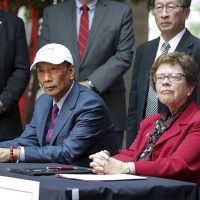