If you have no more than a week to explore Taiwan, and no burning desire to spend an hour on a train or a bus, it makes sense to stay close to Taipei. The capital and its hinterlands are full of places of interest. Whether you have a passion for architecture, culture, ecology, or food, you are sure to find plenty to enjoy in Greater Taipei.

The allure of Tamsui – a riverside town shaped by the missionaries, diplomats, and tea traders who lived there in the late 19th century – is well known. Also highly popular with both local and foreign sightseers are Jiufen and the small settlements served by the Pingxi Branch Railway. Escaping from the crowds often found in these places is not easy, especially on weekends, but it can be done.

Many Taipei-based tourists take a train to the town of Ruifang and then transfer to the Pingxi or Shen’ao branch lines. However, if you stay aboard an Yilan-bound local train for another six minutes, you can disembark at the far quieter Houtong station.

As with several other towns in Taiwan’s ruggedly hilly northeast, mining transformed Houtong from a sleepy hamlet to a place of bustle and prosperity. Taiwan was never a coal exporter of global significance, but the fossil fuel dug out here and elsewhere greatly helped the country as it rapidly industrialized after World War II.

Pioneers of Han Chinese descent had reached Houtong by 1790, but it was another hundred years before the area’s mineral deposits – first traces of gold, then bountiful seams of coal – were discovered. By 1920, the settlement had expanded to 900 households and around 6,000 people.

During the 1960s, Taiwan’s 400-plus coal mines employed over 60,000 miners. The country’s annual coal production peaked at almost five million metric tons in 1968, but output soon dwindled. Houtong’s last coal pit closed down in 1990, and by 2001 there were no functioning collieries anywhere on the island.

Since the demise of the coal industry, Houtong’s population has shrunk to around 500. Nowadays, tourism underpins the local economy. Several fascinating vestiges of the coal era have been preserved and opened to the public as the Houtong Coal-Mine Ecological Park. But there is more to the town than industrial heritage. Houtong also has cats!

The dense cluster of old houses directly west of Houtong Railway Station is said to have more cats than humans, and these adorable felines have become a tourist magnet in their own right. Shops in the neighborhood sell a wide range of cat-themed souvenirs. If you would rather have a cup of coffee, however, there is no shortage of options.

Seeing everything the Coal-Mine Ecological Park has to offer takes a few hours and involves a good bit of walking. What remains of the coal-processing plant stands very close to the station, but the Geology House and the Commemorative House of Miners are about 800 meters to the south.

Displays inside these two buildings are especially absorbing. Exhibits in the Geology House go into some depth about Houtong’s natural environment (wildlife and plants as well as rocks), while the Commemorative House of Miners portrays the living conditions, work practices, and beliefs of the local miners. For example, because of superstitions surrounding the number four (sounds like “death” in Mandarin), tunnels were often marked three, three-and-a-half, and five.

For safety reasons, none of the old mines is open to the public, but a couple of tunnel entrances – including one right across the river from the processing plant – remain visible.

If old mining towns hold no appeal for you, head to Highway 2 – the road that follows the coast eastward from Keelung – through the fishing town of Badouzi (location of the National Museum of Marine Science and Technology), and past the “Yin-Yang Sea.” This last attraction is a remarkable patch of ocean colored by minerals that wash down from the hills nearby.

The communities and points of interest along Highway 2 are reachable by regular public buses. These make for stress-free, inexpensive, and convenient touring – especially if you have an EasyCard, a contactless smartcard that can be topped up at convenience stores.

Independent travelers can jump off the bus at Nanya Fishing Harbor and explore a couple of short hiking paths nearby. Nanzilin Trail, inland of the highway, is especially popular with photographers hoping to capture the sunset. Bloggers who rave about this spot like to point out that anyone willing to walk a mere 990 meters can enjoy 360-degree views. Although the trail is rather short, hikers should still be prepared to exert themselves as they climb from 12 meters above sea level to an elevation of 196 meters.

A very short distance to the east, Nanya Geological Trail is a mere 300 meters long but provides an introduction to various coastal features shaped by wind and wave erosion. Those with patience and a keen eye can find hermit crabs and other denizens of the intertidal zone.

A few kilometers further along, the highway crosses a headland named Bitou Cape. Many of the outsiders who stop here head straight for the seafood restaurants near the fishing harbor. Others tighten their shoelaces and tackle Bitou Cape Trail. On a map, this path does not look very long at all, but it should not be underestimated, as only short sections of its 3.5-kilometer length are flat.

As elsewhere along Taiwan’s coast, it’s advisable to wear a hat or use an umbrella to avoid sunburn, even if the sky is not particularly bright. You can expect to spend two to three hours here, so bring snacks and a bottle of water. Also, make sure your camera battery is charged up and you have plenty of space on the memory card.

Travelers planning to visit this part of Taiwan will find the multilingual website maintained by the Tourism and Travel Department of the New Taipei City Government especially useful for tour suggestions and news about upcoming events. Those drawn to the seaside should take a look at the Northeast and Yilan Coast National Scenic Area Administration’s website. 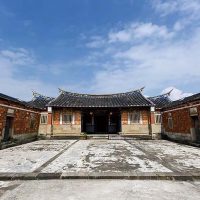 The Hakka Heartlands of Greater Taoyuan