Leading a delegation to the Holy See to attend canonization ceremonies for Pope Paul VI and others, Vice President Chen Chien-jen was received by Pope Francis at Castel Gandolfo, the former Papal summer residence. Chen said Pope Francis sent his regards to President Tsai Ing-wen and said he would pray for Taiwan. The Holy See is one of only 17 countries that maintain diplomatic relations with Taiwan, but the Vatican’s recent signing of a provisional agreement with Beijing regarding the appointment of bishops in China has raised concern in Taiwan about how long that recognition can continue.

In her Double Ten National Day address, President Tsai Ing-wen called on the “authorities in Beijing, as a responsible major power, to play a positive role in the region and the world, instead of being a source of conflict.” She said that China’s unilateral diplomatic offensive and military coercion have not only harmed cross-strait relations, they have also seriously challenged the status quo of peace and stability in the Taiwan Strait.”

“I want to assure everyone that we will neither act rashly to escalate confrontation, nor will we give in,” the president said. “I will not be provoked into confrontation or conflicts that endanger cross-strait relations, nor will I deviate from the will of the people and sacrifice Taiwan’s sovereignty.” She reaffirmed Taiwan’s mission as being a beacon for democracy.

With regard to the current U.S.-China trade dispute and its potential impact on the global economic and trade order, Tsai noted that Taiwan will need to adjust its role in regional development and global supply chains, as well as accelerate is efforts at industrial transformation. 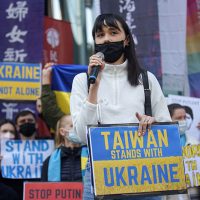