According to many history books, the Chinese Civil War ended in May 1950 with the Communist capture of Hainan Island. By then, Chiang Kai-shek and his Chinese Nationalist (KMT) government had relocated to Taipei, and the world was beginning to refer to Taiwan as “Free China.”

For Nationalist soldiers stationed on several islands within artillery range of the Chinese coast, however, the war was far from over. Chiang had vowed to defeat the Communist “bandits” and retake the mainland, while Mao Zedong was promising to defeat the remnants of the KMT forces and “liber-ate” Taiwan. Until well into the 1970s, the islands’ garrisons and civilian populations suffered frequent bombardment.

Throughout the postwar period, every healthy Taiwanese male was drafted into the Republic of China armed forces, and many of them served on the Kinmen or Matsu archipelagos. Chat with a group of senior citizens anywhere in Taiwan, and you will probably find at least one who can remember patrolling the beach on a front-line island, carrying a rifle loaded with live ammunition, and searching for enemy frogmen sent to spy or sabotage.

Kinmen is 277 kilometers away from Taiwan, but at low tide a mere 1.8 kilometer of sea separates it from the nearest part of the People’s Republic of China (PRC). For much of the Cold War, the Nationalists mainly hurled propaganda at the enemy. Huge loudspeakers installed on Kinmen, for example, broadcast messages loud enough to be heard across the waters on the Communist-controlled mainland.

By the late 1960s, the KMT government had dispatched more than 100 million balloons to the mainland, some of which carried up to 5 kilograms of leaflets, flags, food, toys, and house-hold goods. They even sent cassettes featuring the music of Teresa Teng, a Taiwanese vocalist whose songs were immensely popular on both sides of the Taiwan Strait. Pamphlets were also sealed in beer bottles and thrown into the ocean as the tide was going out.

Kinmen and Matsu are no longer war zones. Since 2001, in fact, regular direct ferries have connected Kinmen with the PRC city of Xiamen, and Matsu with Fuzhou on the mainland. What were for years frontline islands are now very much on the tourist trail, thanks to an appealing combination of splendid scenery, traditional architecture, and fascinating history.

For anyone with a strong interest in East Asian politics and what has happened in this part of the world since VJ Day (August 15, 1945), a few days spent in Kinmen or Matsu can be immensely rewarding.

Kinmen County consists of two well-developed islands and several uninhabited islets. Kinmen proper has an airport, four townships, and a population of around 125,000. The formal name of the other major island is Lieyu, but it is better known as “Little Kinmen.” By the end of 2019, it will be possible to drive between Kinmen proper and Lieyu by means of a 5.4-kilometer-long bridge.

Lieyu, whose official population was a little under 13,000 as of mid-2018, is replete with reminders of the Nationalist-Communist standoff. One of the most interesting is a short walk from Jiugong Port, where ferries from the main island dock.

Under the granite promontory beside Jiugong Port is the Jiugong Tunnel (open 8 a.m. to 5 p.m. seven days a week; admission free), which leads into Kinmen’s largest underground military installation. Excavated in response to what Taiwanese call “8-23” – a period of terrifyingly intense bombardment that commenced on August 23, 1958 and marked the beginning of the Second Taiwan Strait Crisis – the tunnel was a place where patrol boats, landing craft, and small civilian vessels could shelter from Communist attack. The main chamber here is 790 meters long, 11.5 meters high, and 15 meters wide.

Located in a tiny village on the side of Lieyu closest to Communist-held territory, the Hujingtou Battle Museum details some of the Nationalist Army’s most heroic moments.

At the very center of the island, which covers 16 square kilometers, one can find a military monument that has nothing to do with holding back the Communists. Bada Memorial is an imitation of a tower on the Great Wall of China, and the bronze statues on top honor seven Nationalist soldiers who died on the wall in 1933 after holding back thousands of Japanese troops for five days.

Beigan is to the Matsu Islands what Lieyu is to Kinmen. Around 2,400 people live there, the population of the entire island chain being a mere 13,000. Visitors can arrive by ferry from the busier island of Nangan, or directly by plane from Taipei.

Such was the military’s domination of life here that the island’s most historic structure, the gorgeous wood-and-stone Banli Old House, was requisitioned by the army from 1949 to 1992. Following a government-backed restoration, part of the complex now serves as a homestay.

Beigan’s most picturesque settlement is Qinbi. Many of the village’s distinctive stone cottages have been empty for years, but they look like they will last for eternity. On walls around the village, one can still find four-character slogans that date from the Cold War. One urges “military-civilian cooperation.” Another is explicit about the ultimate goal of the KMT in that era: “Recover the mainland!”

Beigan’s principal settlement is Tangqi, and visitors will find the nearby War and Peace Memorial Park Exhibition Center worth a detour. Even those with no interest in the soldiers’ uniforms and ordnance displayed here will enjoy the superb views of the peninsula to the south. Also within view is an islet whose name translates as “Murex Mountain” because its shape resembles the tapered shell of a type of sea snail.

For information about Kinmen County, visit the website of Kinmen National Park. For travelers heading to Matsu, the website of Matsu National Scenic Area Administration is particularly useful. For general information about Taiwan, including how to travel between Taiwan proper and the outlying islands, take a look at the Tourism Bureau’s website, or call the 24-hour tourist information hotline 0800-011-765 (toll free within Taiwan). 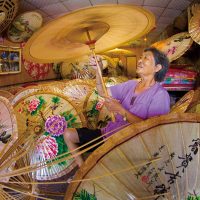 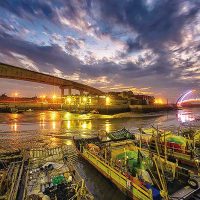