The Silver Economy offers great potential to develop products aimed at meeting the needs of the elderly, such as this walk-in bathtub. Photo: CNA

Taiwan is on track to become a “super-aged” society with 20% of the population over the age of 65 by 2025. This process will have an enormous impact throughout the economy, ranging from healthcare to robotics to housing and the food industry.

The discussion of the aging population often centers on the drain that senior citizens will likely have on the society. Already approximately 30% of Taiwan’s total National Health Insurance (NHI) expenditures go toward care for diseases common among the elderly, and this share will only increase as the number of elderly rises. NHI expenditures have increased 4.7% annually on average since its establishment in 1995, with the aging population and increasing prevalence of chronic disease as primary factors, according to NHI data.

The government has responded by expanding the social safety web through the development of Long-term Care 2.0, a comprehensive care system aimed at encouraging healthy aging. Yet this system’s budget is likewise strained and debate continues in the legislature over the best ways to fund the system.

But viewing the aging population only as a burden overlooks the market potential this population offers for products and services that can stimulate economic development and reduce the burden of an aging population on the society, stresses Dr. Chen Liang-kung, head of geriatrics at Taipei Veterans General Hospital. “The aging population is a crisis but also an opportunity” in what is being called the “Silver Economy,” he notes.

In a background paper the European Commission defined the Silver Economy as “the economic opportunities arising from the public and consumer expenditure related to population ageing and the specific needs of the population over 50.” In 2015, Merrill Lynch estimated the value of the global Silver Economy at US$7 trillion per year – which if it were a country would make it the third largest economy in the world – while the European Commission forecasts that private spending power in the global Silver Economy will rise to US$15 trillion by 2020.

Dr. Chen is a strong believer that the scope of the Silver Economy should be expanded to include not only those already elderly, but also younger members of society. Those in their forties and fifties might be surprised to find themselves included in the Silver Economy, but Dr. Chen explains that there are good reasons for doing so.

“Long-term care is focused on elderly, disabled, or disadvantaged people, and in Confucian culture you must look after them, but it’s considered unethical to make a profit off of them,” he observes. “But if you look at the aging rather than the aged – those in their forties and fifties – they are pursuing a better quality of life for their future. They are looking at their parents and hoping to have a better future than them, so that is a market which industry can serve. We should promote economic development and product development that targets the whole aging process.”

Dr. Chen is working with a loose consortium of Taiwanese technology companies headed by Stan Shih, the retired founder of Acer Inc., to create an array of products and services aimed at encouraging exercise, cognition, and healthy social interaction. Video game makers, for example, are producing games targeted at middle-aged players that incorporate Augmented Reality (AR) components to both sharpen the mind and encourage players to exercise. Some of these games include a “silent assessment” function that track how the gamers are improving in terms of cognition and activity over time.

These games are also designed to encourage positive social interactions. Strong social connections have long been regarded as vital for healthy aging, and a recent study published by the Mayo Clinic Proceedings found that sports involving a partner were more beneficial to health than activity engaged in alone. For instance, regular tennis playing added some 9.7 years to a person’s life, far surpassing equally rigorous but individual activities such as running, which only added 3.2 years.

To meet the needs of the aging, Dr. Chen suggests, business and technology may be able to provide more relevant solutions than the medical field, which is generally organ-specialized and focused on providing acute care for specific illnesses. Equally important, fostering the Silver Economy can provide business opportunities and employment for younger members of society.

Dr. Chen sees the process as bringing additional social benefits. For business to develop products and services for the elderly, he notes, “the younger generation will need to talk to those older people in order to learn how they feel and what their needs are, and that facilitates inter-generational communication.” 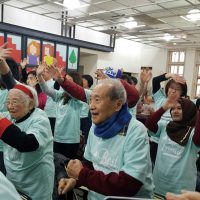 Taiwanese Outlook Positive Despite Pandemic The COVID-19 situation in Taiwan continues to be severe, with the Central Epidemic Command Center (CECC) reporting between 250-400 new...