There is more to Taiwan than just Taiwan – meaning the country consists of more than the main island on which over 99% of its citizens live. In addition to the Kinmen and Matsu archipelagos (which are far closer to the Chinese mainland than to Taipei), the windswept Penghu Islands in the Taiwan Strait, and Lanyu (Orchid Island) and Green Island off the east coast, there is Xiao Liuqiu.

Unlike the country’s other minor islands, Little Liuqiu (as Xiao Liuqiu is occasionally known) is close enough to a population center to have become a popular day-trip destination. For the two million-plus people who live in the southern metropolis of Kaohsiung, Xiao Liuqiu is on their doorstep.

Buses from downtown Kaohsiung take an hour to reach Donggang, a town in Pingtung County that has long been associated with fisheries. There are usually 18 ferries per day from Donggang to Xiao Liuqiu. The few that do not go to the island’s principal town, Baisha, dock at Dafu, the only other settlement of significance. The distance of both routes is a little under nine nautical miles, and round-trip tickets for adults cost around US$14. Extra sailings are added during weekends and other peak periods.

“The ferry out to the island takes about as long as a trip on the Staten Island ferry, and the boat ride is a good bit calmer than the voyage to Green Island or Lanyu,” says Brown.

Visitors with rumbling stomachs, or time to kill before sailing, should walk the 100 meters from the ferry terminal to Donggang’s Huaqiao Seafood Market. Many of the market’s smaller eateries specialize in sashimi, but cooked items are also available. Shark meat wok-fried with ginger, garlic, and pickled cabbage is especially good. Since there is very little farming and no industry on Xiao Liuqiu, seafood naturally is a staple in the diet.

The island covers a mere 6.8 square kilometers. “It’s small enough to be manageable on an electric scooter, and the modest speed of these machines fits in perfectly with Xiao Liuqiu’s take-it-easy vibe,” says Brown. “You can reckon on going all the way around the island at least twice before having to swap your battery for a new one.”

Day-trippers need not arrange scooters before they arrive, as rental agents wait for each ferry. Those who book accommodations (overnighting is highly recommended) are sure to be offered the use of a vehicle by their hotel or homestay. Anyone unfamiliar with this form of transportation will be given a quick lesson on how to accelerate and brake.

Because getting around on two wheels is so popular, very few of the 12,300 residents own a car. The lack of traffic means the sounds of nature can be heard everywhere. There are birds in abundance, but more interesting forms of life lurk beneath the waves. The surrounding waters are home to 20 kinds of coral, around 300 fish species, and some larger creatures.

During a recent three-day stay on the island, Brown was impressed by a wide-ranging commitment to ecotourism that goes beyond replacing hydrocarbon-burning motorcycles with silent, non-polluting electric scooters. “The island is a protected turtle sanctuary, and the coral reefs surrounding Xiao Liuqiu are quite literally swimming with enormous sea turtles,” he notes.

At several excellent snorkeling spots, visitors have a good chance of encountering green turtles (Chelonia mydas). These sublime sea creatures are often more than 1 meter in length and may weigh close to 200 kilograms.

If it is not high summer, Brown advises snorkelers to wear wetsuits, as “not only do they keep your body warm enough to stay in the water for well over an hour, but they also provide additional buoyancy.”

Marine wonders can be enjoyed without full immersion. Qualified guides lead ecotours of the intertidal zone, pointing out not just crabs, starfish and sea cucumbers, but also oddities like sea hares. When attacked, these finger-length creatures squirt out purple ink to disorient their enemies. Nighttime visitors to the intertidal zone also have a good chance of seeing bioluminescent plankton.

Xiao Liuqiu gets its former English-language name, Lamay Island, from the tribe that once lived there. The Lamay were an Austronesian people who got on the wrong side of the Dutch, the dominant power in this part of the world in the middle of the 17th century.

After the Lamay twice massacred shipwrecked Europeans, the Dutch and their allies attacked. The invasion spelled the end of the Lamay tribe, since those who did not die in the fighting were captured and exiled. One of Xiao Liuqiu’s attractions is Black Ghost Cave, where Lamay warriors made their final stand. Besides the location’s moving backstory, visitors are invariably impressed with the stirring views of coral crags and the shimmering ocean.

After the Dutch incursion, Xiao Liuqiu was uninhabited for decades, until the ancestors of the current islanders arrived from the Chinese province of Fujian in the late 18th century. Like the Fujianese who settled elsewhere in Taiwan, these migrants brought with them a lively religious culture. They built temples – for its size, the island has a large number of folk shrines – and burned ornate votive boats. The latter custom was originally a response to epidemics and other types of misfortune which the Fujianese blamed on malevolent spirits.

Another point of considerable interest and beauty is Geban Bay. As on most of the island’s beaches, visitors should wear shoes when walking on the sand, as it contains fragments of broken coral. The grit, however, deserves a closer look. Careful sifting will reveal tiny five-pointed yellow stars. These are foraminifera, the shells of organisms less than 1 millimeter across. (The removal of shells, sand, or foraminifera as souvenirs is frowned upon by the authorities.) During the warmer months fireflies can be seen around the bay, and green turtles come ashore to lay eggs.

Planning a trip to Xiao Liuqiu is made easy by an abundance of online resources in English and Chinese. These include the Liuqiu Official Tourism Website and the website for the Dapeng Bay National Scenic Area. For a broad range of information about Taiwan, visit the Tourism Bureau’s website or call the 24-hour tourist information hotline 0800-011-765 (toll free within Taiwan).

Treat Yourself to a Soak in Taiwan’s Tranquil Hot Springs 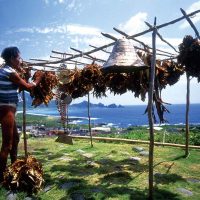