From the 17th century, when Taiwan first began to be settled by migrants from Fujian Province on the Chinese mainland, through the 19th century, strong economic and family relationships continued to tie Taiwan to Fujian.

For much of that period, Taiwan produced surpluses of rice, sugar, and other commodities that it exported to the mainland. The lion’s share of trade was handled by a small number of ports. Among them, Lugang (sometimes spelled Lukang) was second only to Tainan, then known as “Taiwanfu” or “Taiwan capital.” An idiom reflected this ranking: “First, ‘Fu’; second, ‘Lu’; third, Mangka [today’s Wanhua District in Taipei].”

These days, Lugang is a relatively small town (population 86,000) in Changhua County. But it is a popular destination for both domestic and foreign tourists because of its historical and cultural significance. The literal meaning of the town’s name is “deer harbor,” but some scholars believe the derivation is an approximation of the pronunciation of the place name originally used by the area’s indigenous Babuza people, rather than a description inspired by local wildlife. The settlement grew rapidly after 1783, when the port was opened to direct voyages across the Taiwan Strait. Soon more than 3,500 ships were using Lugang’s dockside each year.

According to Donald R. DeGlopper, an American anthropologist who did fieldwork in the town in the late 1960s, by the 19th century “Lukang was a city of wholesalers and middlemen, with many large firms devoted to trade in rice, sugar, cloth, timber, pottery, fish and other commodities. Oxcarts and gangs of porters moved through its narrow streets and hundreds of workers loaded and unloaded the bamboo rafts and small boats that were rowed or poled into its shallow inner harbor. The merchants lived in solid, multi-story houses, the very bricks and tiles of which had been imported from Fujian.” Lugang’s port was the best natural harbor in central Taiwan – yet that was not saying much. At intervals it became choked with silt, though the violent typhoons that afflict Taiwan would sometimes cause the port to clear itself. Before the 19th century ended, however, the town found itself in a downward spiral due to further sedimentation and the emergence of alternative entrepots like Kaohsiung at the southern end of the island.

The constant rebuilding and modernizing common to nearly every dynamic trading center ground to a halt. The decline was unfortunate for the businesspeople of that time, but created a boon for today’s tourists, providing a glimpse into the Taiwan of another era. The heart of old Lugang – almost everything of interest lies between the Queen of Heaven Temple and Wenkai Academy less than a mile to the south – is filled with picturesque old-style shop-houses and places of worship.

Not everything here dates from before the Japanese colonial era, however. One exception is a French Baroque-style mansion built in 1913-1919 by the Koo family, then one of Taiwan’s leading landowning clans and later a major force in the country’s industrialization. Now the Lugang Folk Arts Museum, the building houses an intriguing collection of traditional clothes and furniture, as well as antique musical instruments. Another “newer” addition to the old section of town is the elegant whitewashed Assembly Hall, opened in 1928. Lugang is not served by high-speed or conventional trains. In fact, some say that when Taiwan’s north-south railroad was being planned in the first decade of the 20th century, Lugang’s conservative elders failed to grasp the economic benefits a rail connection could bring and actively lobbied against having it pass through their town. The story seems unlikely, though, since a huge detour would have been needed to bring the rail line to Lugang, not to mention the fact that the town was already well down the path of decline.

Fortunately, the town has good road links. Visitors coming by car can approach from the north or south on either Freeway 1 or Freeway 3, then take Expressway 76 toward the coast. Expressway 61 hugs the shore, and is convenient if on the same day you want to visit the Gaomei Wetlands (34 kilometers north of Lugang) or Dajia (41 kilometers north), the center of pilgrimages in honor of Matsu, the goddess of the sea.

Modern roads are one reason why bus tours of Lugang work especially well. Taiwan Tour Bus, a network of services provided by licensed tour companies under the supervision of Taiwan’s Tourism Bureau, offers a day-long guided excursion called Rediscovery of Lugang Glory and Wanggong (NT$1,850 per person; NT$300 for children below the age of three).

The tour’s first stop is Longshan Temple, one of Taiwan’s most tranquil and beautiful Buddhist shrines. Your guide is sure to point out the gorgeous octagonal dragon ceiling in the front pavilion, and the wooden window screens that are masterpieces of carving and embellishment. After a tricycle tour through the old streets (professionals do the pedaling) and lunch, the tour heads 18 kilometers down the coast to the bucolic fishing community of Wanggong.

Wanggong is synonymous with the cultivation of oysters, and it is here that Tour Bus passengers can do something few guidebook-toting, fully independent travelers can experience: head out onto the intertidal zone and see for themselves how oysters are raised on bamboo platforms.

Lugang is famous for having preserved so much of its past, but it is not quite true to say nothing ever changes. Located just outside the town, the Taiwan Glass Pavilion – the tour’s final stop – was developed by leading glassware manufacturers as a showcase for their techniques. The main attraction here is Husheng Temple, built between 2007 and 2012 using 70,000 pieces of colored glass. However many Taiwanese temples you have already visited, do try to see this exceptional structure.

Details of other Taiwan Tour Bus trips can be found on the network’s multilingual website. Useful online resources for those heading to Changhua include the county government’s website and the national Tourism Bureau site. The 24-hour tourist information hotline can be reached by dialing 0800-011-765; calls within Taiwan are toll free. 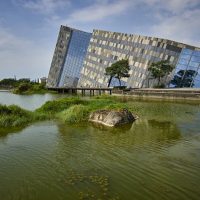