MEET THE PRESS — After arriving in Taipei from Tainan by High Speed Rail, incoming premier William Lai was mobbed by journalists inquiring about his plans for his cabinet. Photo: CNA

Two-term Tainan Mayor William Lai (Lai Ching-te), considered one of the rising stars in the Democratic Progressive Party (DPP), was appointed to the premiership in early September. Lai, who turns 58 next month, holds a master’s in public health from Harvard and previously served as a member of the Legislative Yuan. He takes over from finance specialist Lin Chuan, who said he was stepping down after slightly less than 15 months in the post because he had completed the major tasks he had set for himself, including preparation of the 5+2 Innovative Industries Plan, long-term care policy, revision of the Electricity Act, proposed tax reform, and infrastructure development plan.

Lin, 65, said that with the approach of next year’s mayoral elections, it was appropriate to turn the reins over to a new premier with sharper political consciousness.

Commission to be Absorbed by MAC

After nearly a century in existence, the Mongolian and Tibetan Affairs Commission will cease to exist by the end of 2017 and most of its responsibilities and staff will be shifted to the Ministry of Culture or the Mainland Affairs Commission (MAC). Six of the commission’s 49 staff will be transferred to the MAC, while the remaining employees will handle Mongolian and Tibetan affairs under the Ministry of Culture, according to a spokesperson for the Executive Yuan. The commission was established in 1928 when the ROC government was located in China, and currently provides services for the 472 Mongolians and 648 Tibetans permanently residing in Taiwan. The commission had repeatedly weathered calls for its termination, mostly from DPP legislators on the grounds that Taiwan’s government has no authority over either Mongolia or Tibet, and the move was a top priority for this year’s budget.

On at least four occasions in August, Chinese surveillance aircraft were observed close to Taiwan, prompting concerns that the flybys were intended to familiarize Chinese aircraft with maritime routes across the Pacific Ocean that can avoid U.S. surveillance and to project power in the region.

The Ministry of National Defense (MND) said in a statement on August 13 that, for the third consecutive day and the fourth time that month, Chinese Shaanxi Y-8 surveillance aircraft skirted Taiwan’s airspace as they returned to their base in China following maritime training missions. According to the MND, one of the aircraft edged up to Taiwan’s airspace in the south as it passed through the Bashi Channel between Taiwan and the Philippines before turning northeast and continuing on near to Japan’s Miyako Islands, while the second aircraft flew southeast after passing through the channel. These flybys reportedly occurred regularly during the Ma administration, which did not disclose them, but the Tsai administration has chosen to publicize them in order to make the public aware of the state of security in the region. 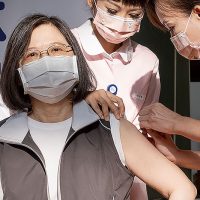