By nearly all measures, Taiwan’s economy is performing well. Exports – crucial drivers of growth – are up 12.5% through July in annual comparisons, according to data from the Bureau of Foreign Trade of the Ministry of Economic Affairs (MOEA). Equally important, so are export orders, an indicator of future sales, which rose in July by 10.5% year-on-year to reach US$38.72 billion, the 12th consecutive month of gains, according to MOEA. 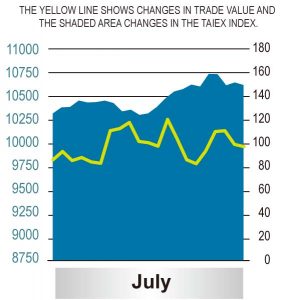 Unemployment is also up, climbing to 3.84% in July from June’s 3.74%, as noted by the Directorate-General of Budget, Accounting and Statistics (DGBAS), but so is the stock market, which has remained above the 10,000-point benchmark for over 70 days – a record – and which is credited with boosting consumer confidence. National Central University’s Research Center for Taiwan Economic Development, which tracks consumer confidence, reported that the index gained 1.76 points in July, rising to 79.95. The index is on a 200-point scale, and anything below 100 is considered pessimistic (the index has never breached that mark).

Most private and public economic research organizations have raised their estimates for GDP growth in 2017. For example, Academia Sinica, Taiwan’s top academic research institution, is forecasting 2.18%, up from its previous projection of 1.68%, while the DGBAS predicts a 2.05% rise. So why is the government’s business climate monitor signaling blue-green – an indicator of sluggishness?

The government’s National Development Council (NDC), which oversees the business climate monitor, uses a five-color system to indicate the general state of the economy, with green indicating growth, red signifying overheating, and blue pointing to recession. Yellow-blue is one step away from blue.

Several factors were blamed for the gloomy barometer, including a stronger NT dollar, which is currently trading at NT$30.8 to the US dollar, making Taiwan’s exports less competitive on the global marketplace, as well as U.S. monetary policy changes, international trade conflicts, and geopolitical tensions such as the crisis over North Korean missile testing. 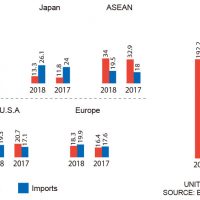 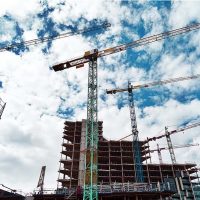