The Taichung government would like the city's airport to be upgraded to become a full-fledged international airport. Photo: Wikipedia.

Local authorities are pressing for Ching Chuan Kang to be upgraded to international airport status.

But since a flash flood disrupted service at Taoyuan Airport in June 2016, Taichung officials have been urging that the city’s Ching Chuan Kang Airport, which also serves as an air force base, be upgraded to a full-scale international airport. Taichung Mayor Lin Chia-lung has maintained that an international airport is needed to serve the city’s population of 2.75 million and its multiple industries, as well as to reduce congestion at Taoyuan Airport, where airport traffic reached 40 million passengers last year.

In a July 2016 report by Taiwan’s Central News Agency, Lin described his proposal as a “well-thought-out strategy that would allow the northern, central, and southern regions to complement one another other and help achieve balanced regional development.”

Taichung Airport has been steadily boosting its international flight capacity in recent years. International and cross-strait passenger traffic volume rose from 91.4 million in 2012 to 147 million in 2016, according to the Civil Aeronautics Administration (CAA). The airport currently serves 17 international destinations. Eight of those are cross-Strait routes; there is also service to Hong Kong, Macau, Japan, Korea, Vietnam, and Cambodia.

“Based on the passenger traffic volume forecast and long-term development trends, the Taichung metropolitan area has international route needs,” the CAA said by email, adding that Taichung Airport serves as a “good regional international airport” for Northeast and Southeast Asia.

Yet some observers say Taichung Airport’s development could be hampered by its narrow taxiways, insufficient airport apron space, and a restriction on flights between 11 p.m. and 7 a.m. (to avoid noise complaints).

“Not only do we need to consider demand at Taichung Airport, but we also need to look at the actual situation on the ground, and determine if it’s feasible to make major upgrades,” says Chen Ming-ming, chief executive officer of the KKday e-commerce travel platform and a veteran of the tourism industry.

“It’s not uncommon for local officials in Taiwan to press the central government to support their big infrastructure projects for political reasons,” Chen observes. In this case, Taichung’s prestige would be raised if it could have an international airport of its own, as Taipei and Kaohsiung do, he adds.

The local government has tried and failed to get approval to expand Kaohsiung Airport in the past, observes Paul Lee, head of AmCham Taipei’s Infrastructure Committee and chairman and CEO of Global Construction International. “The city wanted to lengthen the runway to bring in more logistics investment, but they faced restrictions on building because of the airport’s proximity to the city,” he says.

Diverting flights from Taoyuan to Kaoshsiung seems unlikely. Like Taichung, Kaohsiung has a longstanding ban on late-night flights (in Kaohsiung’s case the ban is from midnight to 6:30 a.m.). Further, airlines would lose money if flights are diverted from Taoyuan to Kaohsiung, as planes would need to fly at off-peak hours. “The airlines wouldn’t accept that, nor would they accept being diverted to Taichung,” says Chen.

Meanwhile, Taoyuan Airport is undergoing substantial upgrades of its own, which will help it to ease congestion problems. Expansion of Terminal 2 is scheduled to be completed in 2018, and construction of Terminal 3 by the end of 2020. The Taoyuan International Airport Corp. has moved up the completion date of a third runway from 2030 to 2025 to meet rising demand.

Taichung Airport officials are proceeding with plans to expand their airport, whether or not it is ultimately upgraded to international level. The Central News Agency’s July 2016 report noted that construction of a second runway has begun and that seven overnight parking bays will be completed by 2018.

“There is sufficient land for the development and use of the airport in the vicinity of Taichung Airport,” the CAA said, adding that future development will be contingent on growth of airport passenger traffic and the surrounding metropolitan area.

The local government has also put together a NT$64 billion (over US$2 billion) plan to build a 36-kilometer MRT system that would connect Taichung’s airport and seaport to the city’s downtown. The MOTC will review the plan this year.

Based on current cargo flights, facilities, capacity, and future growth projections, “Taichung Airport can serve as a solid alternative airport to the Taoyuan and Kaohsiung airports,” Paul Lee concludes. 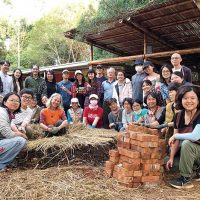 Can Taiwan Overcome its Demographic Dilemma?