UNWELCOME — Li Ching-yu, second from right, wife of Taiwanese pro-democracy activist Li Ming-che who is being detained in China, prevented from boarding a flight to Beijing. Photo: AP/Johnson Lai

While on a trip to China, Taiwanese human rights advocate Lee Ming-che was seized by the authorities on March 19 and held incommunicado before China finally announced that he had been arrested for “activities endangering national security,” according to media reports. As of press time, Lee, an instructor at Wenshan Community College and a former DPP worker, remains in custody in an undisclosed location in China. Lee’s wife, Lee Ching-yu, was blocked from entering China after her “Taiwan Compatriot” travel document was abruptly canceled as she was about to board a flight from Taipei to Beijing on April 10. Lee Ching-yu was provided with a photocopy of a letter purportedly written by her husband stating that he was healthy, but with few details.  She was also warned by a go-between that if she insisted on taking the case public, her husband’s videotaped confession would be broadcast on Chinese TV. Lee Ching-yu and supporters remain unclear as to why her husband was targeted at all, as he reportedly kept his views on China’s human rights violations low-key.

At an April 7-9 summit between U.S. President Donald Trump and Chinese President Xi Jinping at Trump’s Mar-a-Lago resort in Floria, Taiwan was mentioned but was not used as a bargaining chip between the two powers, the Ministry of Foreign Affairs said April 12. Vice Minister of Foreign Affairs Leo Lee told the Taiwan legislature’s Foreign Affairs and National Defense Committee that U.S. senior officials had briefed Taipei regarding the summit. According to the U.S. officials, Chinese Minister of Foreign Affairs Wang Yi raised the issue of Taiwan with U.S. counterparts, but reportedly were given a reply that expressed the standard U.S. position on China-Taiwan relations and invoked the United States’ Taiwan Relations Act. 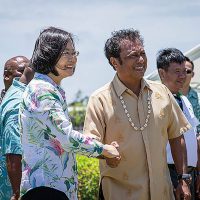