Economists are increasingly bullish on Taiwan’s growth prospects through 2017, with three local forecasting organizations raising GDP growth projections to over 2% for the year. The Chung-Hua Institution for Economic Research (CIER) announced on April 19 that it had raised its forecast from 1.73% to 2.11%. “The stronger-than-expected momentum of the global economic recovery was the main reason CIER increased the forecast,” the institution’s president, Wu Chung-shu, said at a press conference in Taipei. He added that first quarter growth is estimated at 2.76%. Earlier the Yuanta-Polaris Research Institute raised its 2017 growth forecast from 1.8% to 2.1%, and the Taiwan Institute of Economic Research (TIER) similarly raised its forecast from 1.78% to 2.04%. All three organizations cited a rebounding global economy as benefitting Taiwan’s export-oriented economy. The International Monetary Fund and Taiwan’s Directorate General of Accounting, Budget and Statistics (DGBAS), however, both maintain their growth forecasts for Taiwan below 2%. Economists across the board note remaining risks that might dampen growth, including possible U.S. rate hikes, an economic slowdown in China, and volatile political developments in the Asia-Pacific. A spike in oil prices could also have an impact, but with U.S. shale oil contributing to global stocks, that looks unlikely, according to CIER. 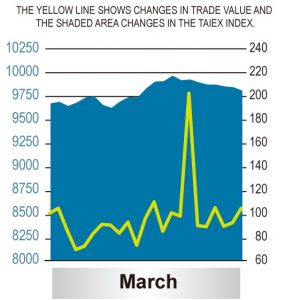 Taiwan’s exports continued their bull run, reach US$72.11 billion, a gain of 15% for the year up to March in annual comparisons. Imports, 69.5% of which consist of raw materials that are mostly manufactured into export goods, rose even faster, rising 21.6% through March to reach US$61.32 billion for a US$10.79 billion favorable balance of trade, according the Bureau of Foreign Trade.

Exports to Taiwan’s largest trading partners, China and Hong Kong, which together take 40% of Taiwan’s exports, surged in Q1 by 22% to reach US$28.81 billion, while Taiwan’s second largest export destination, ASEAN, likewise saw double-digit expansion of 18% year-to-date to reach US$13.83 billion. Gains in exports to other major trade partners were more muted but still positive. Exports to the United States, which took 11.3% of Taiwan’s trade goods, saw strong gains of 7.6% to reach US$4.81 billion, while exports to the EU, which account for 8.7% of the total, rose by 5.8% to come to US$6.26 billion. Even exports to Japan gained 2.8% to amount to US$4.81 billion. Japan is the source for much of Taiwan’s technology components, and Taiwan imported some US$10.29 billion worth of goods from Japan in Q1, for a bilateral trade deficit of US$5.47 billion.

Mineral products and chemicals, which comprise 3.9% and 6% of total exports respectively, saw substantial increases in export value, gaining 34.5% and 14.4% respectively in Q1 compared to the same period last year, reflecting both a stronger market and higher oil prices. Oil is currently averaging some US$50/barrel compared to last year’s US$37/barrel, which had a strong impact on revenues from related sectors. The export value of one of those sectors, plastics, increased by 16% to US$5.1 billion in Q1, but textiles actually fell in annual comparisons by 0.5% to US$2.37 billion, perhaps reflecting shifts in the U.S. retail sector toward cheaper “fast fashion” products, according to industry insiders.

Taiwan’s vital electronics and machinery sectors also saw double-digit gains of 16.6% in Q1. At US$39.46 billion, the sector accounts for 54.7% of Taiwan’s total export value. The machinery subcategory, which has been selected for special support by the government, makes up 7.5% of total exports and gained an additional 11.2% in Q1.

Taiwan’s Purchasing Managers Index (PMI), a leading indicator, reached a record high of 65.2 in March, up from 55.8 in February. It was the 13th consecutive monthly gain. Export orders, also a leading indicator of future economic activity, rose 12.3% year-on-year in March to reach US$41.12 billion.

In response to the strengthening economy, consumer confidence in Taiwan rose from 78.12 in March to 78.2 in April, the highest measure since October 2016, as reported by National Central University. Unemployment declined slightly, from February’s 3.83% to 3.78% in March, while the Consumer Price Index remained steady at 0.18%.