The leaders of the United States and China and their senior officials have not mentioned Taiwan in the initial official comments following the first face-to-face meeting between U.S. President Donald Trump and China’s President Xi Jinping.  Chinese state news agency Xinhua reports that Trump and Xi “exchanged views on regional hot-button issues,” though it does not provide more detail.

Nor was Taiwan mentioned in the press briefing given after the talks by White House spokesperson Sean Spicer, Secretary of State Tillerson, Secretary of the Treasury Steven Mnuchin, and Secretary Commerce Wilbur Ross.

Tillerson says the U.S. and China had “candid discussions on regional and maritime security.”

“President Trump noted the importance of adherence to international norms in the East and South China Seas and to previous statements on non-militarization,” Tillerson says.

Most Taiwan experts anticipated a benign outcome for Taiwan from the summit but few were willing to rule out the possibility of an unexpected statement or announcement.

Ahead of the talks, Ross Feingold, a Taipei-based political risk consultant who advises clients on political developments in Asia including cross-Strait relations, said a substantive improvement in U.S.-Taiwan relations is likely in areas such as trade and security.

More than 100 local and international non-governmental organizations have put their support behind a Taiwanese human rights advocate detained in China.

Lee Ming-cheh, who was reported missing on March 19, is being detained in China by a branch of the state security police. On March 29, Chinese authorities said Lee was being held for involvement in a threat to national security. China has not disclosed Lee’s location.

His wife plans to travel to China on Monday, April 10, in a bid to seek his release.

A press conference in Taipei on Friday, April 7, featured Amnesty International, as well as Human Rights Watch’s China director Sophie Richardson and New York University academic Jerome A. Cohen, via a video link. At the time of writing, 136 organizations had signed a petition urging China to release Lee.

His wife, Lee Ching-yu (李凈瑜) attempted to travel to China on April 10 in a bid to uncover where her husband is being held and what charges he faces. She was scheduled to depart Taipei at 1 p.m. but was informed at the airline counter this morning that China’s Ministry of Public Security had canceled her travel permit.

Lee is a former secretary for Taiwan’s ruling Democratic Progressive Party (DPP) executive in Taoyuan. He is an NGO worker who frequently works with human rights lawyers in China.

“The choice of Taiwan was made not only with regards to its central geographic location and ease of operating logistics, but also considering its status of being the freest place in Asia in our annual Press Freedom Index ranking,” says RSF Secretary General Christophe Deloire.

Deloire told The New York Times the organization originally wanted to open its Asia office in Hong Kong but the organization was concerned about “a lack of legal certainty” and surveillance of its members.

Taiwan ranked 51 in the 2016 World Press Freedom Index. The organization says that the main threat to Taiwanese media freedom comes from China, which has been exerting growing economic and political pressure on the Taiwanese media. 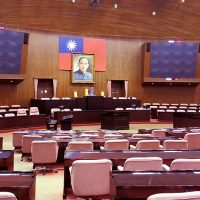