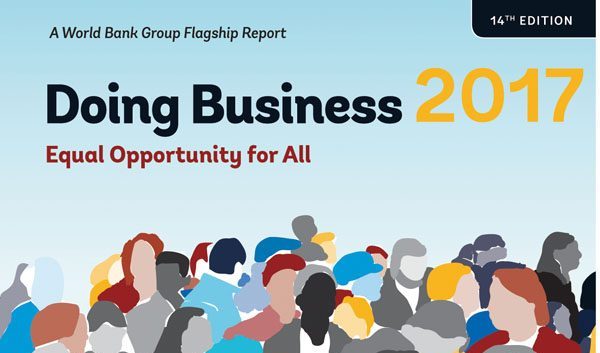 Taiwan has found it hard to move up further in the annual Doing Business report.

Each year in late October, the World Bank releases the results of its Doing Business survey that assesses, country by country, the ease or difficulty for private enterprises of conducting business. In the newly issued 2017 report, Taiwan (or “Taiwan, China” as the World Bank insists on calling it) slipped slightly – from 10th place last year to 11th this time among the 190 countries covered.

Actually, when the 2016 results were announced last year at this time, they showed Taiwan in 11th place, but a recalculation of the rankings to reflect data revisions and changes in methodology later moved Taiwan up one notch.

Although Taiwan has made striking progress in the survey over the years – it ranked as far down as number 33 as recently as 2011 – it currently appears to have reached a plateau, finding it difficult to break into the very top rungs. This year Singapore, previously the perennial number-one on the list, fell to second place, ceding the top position to New Zealand. Others that came in ahead of Taiwan were, in order, Denmark, Hong Kong, Korea, Norway, the UK, the United States, Sweden, and – for the first time – Macedonia.

China was considerably down the list at number 84. The bottom five countries were South Sudan, Libya, Venezuela, Eritrea, and Somalia (added this year as the latest entry).

In contrast to many other international competitiveness surveys, Doing Business focuses on the practical impact of specific regulations, especially as they affect small and medium-sized enterprises operating in the largest business city in an economy (in Taiwan’s case, Taipei). The survey is based on quantitative indicators in 10 separate categories: starting a business, dealing with construction permits, getting electricity, registering property, getting credit, protecting minority investors, paying taxes, trading across borders, enforcing contracts, and resolving insolvency. Doing Business also measures features of labor market regulations, but does not include that data when calculating the rankings.

At one time, Doing Business focused mainly on the efficiency of regulatory processes, but now also seeks to take into account the quality of business regulations.

The Taiwan government pays close attention to the content of the survey. The National Development Council will usually follow up by analyzing the results and encouraging relevant agencies to introduce improvements in areas where weaknesses have been identified.

As was the case last year, the category in which Taiwan ranked the furthest down the ladder in the 2017 report was – surprisingly for an economy as dependent on international trade as Taiwan – Trading Across Borders, where it came in as number 68. Based on information supplied by local freight forwarders, customs brokers, and traders, this section measured the time and expense involved in completing necessary import-export procedures. It found that for exports, an average of 17 hours is needed for border compliance and 31 hours for documentary compliance, with the associated costs amounting to US$335 and US$84 respectively. For imports, the average time is 47 hours for border compliance and 41 hours for documentary compliance, at costs of US$389 and US$90.

While those figures are significantly better than the comparable levels for the East Asia & Pacific as a whole, they are a long way from the performance in the top-ranking markets. Among the countries within the region, Korea, Singapore, Hong Kong, Japan, and Malaysia all scored better than Taiwan in this category.

Another area in which Taiwan performed relatively poorly – and the one that Doing Business identified as needing the greatest improvement – is Getting Credit. In this section, Taiwan scored well regarding the scope, coverage, and accessibility of credit information, but did considerably less well in measurements of the strength of the legal rights of lenders and borrowers under collateral and bankruptcy laws.

In two categories, Taiwan’s ranking was outstanding. For Getting Electricity – the time and cost necessary to get a power connection at a new facility – it ranked number two, in between first-place Korea and third-place Hong Kong. For Dealing with Construction Permits, it ranked third, surpassed only by New Zealand and Australia. According to the data collected by the survey, obtaining the needed construction permits to build a warehouse in the Taipei area requires 10 procedures, takes 93 days on average, and costs just 0.4% of the warehouse value.

This year for the first time Doing Business added factors relating to gender in its handling of three categories: starting a business, registering property, and enforcing contracts. It noted that discrimination against women in the workforce “limits choices and creates distortions that can lead to less efficient outcomes.”

As it does annually, Doing Business 2017 added the caveat that its survey does not measure all factors affecting the quality of an economy’s business environment or its national competitiveness. For example, it does not touch on macroeconomic stability, development of the financial system, market size, the incidence of bribery and corruption, and the quality of the labor force.