The Taipei City government and the Farglory Group agreed to dissolve the contract for the beleaguered Taipei Dome project on April 14, with the details and compensation amounts remaining unspecified. The Taipei Dome, a 40,000-seat indoor arena being constructed near Sun Yat-Sen Memorial Hall at the intersection of ZhongXiao East and GuangFu North Roads, has been under fire for allegations of contractual irregularities and unsafe planning and construction. Approved nearly a decade ago, construction of the “Big Egg” began at the end of 2011 under the previous mayoral administration of Hau Lung-bin. Construction was suspended by the Farglory Group last May after the administration of current mayor Ko Wen-je alleged that construction plans had been altered without city government approval, providing inadequate means for emergency evacuation and damaging historic buildings in the area. The contract dissolution may leave the city on the hook for up to NT$37 billion (US$1.14 billion) in compensation to Farglory for losses, construction fees, and salaries, but Mayor Ko said that compensation would be made only after an intensive review of the accounts associated with the project. Meanwhile, the city is reportedly in the market for another company to take over the project.

Citing potential risks to service quality due to the large number of construction projects already underway, the Taoyuan International Airport Corp. (TIAC) announced April 24  that it is suspending plans to build a fourth terminal. The airport is already working on expanding Terminal 2 and is preparing to begin construction on the long-anticipated Terminal 3. TIAC expressed concerns that additional construction at the airport at this time could cause service delays. Costing an estimated NT$2 billion (US$61 million) and capable of handling some 5 million travelers a year, the fourth terminal  represented a much smaller project than Terminal 3 and was scheduled to be completed in late 2018, ahead of Terminal 3’s scheduled opening in 2020. The mammoth NT$47 billion (US$1.4 billion) third terminal will be able to handle 45 million passengers annually, compared to the current capacity at the first two terminals of 32 million passengers.

The outgoing Ma Ying-jeou administration announced that it was dropping its bid to join the China-sponsored Asian Infrastructure Investment Bank (AIIB). The AIIB was initially announced in 2013 by Chinese president Xi Jinping as a multilateral development bank aimed at promoting “interconnectivity and economic integration in the region,” according to its website, and was formally inaugurated in January of this year. Taiwan originally applied to be a founding member of the bank but was rejected. Its bid to join as a regular member was likewise not accepted by China on the grounds that it is a “family matter” and that Taiwan needs to follow Hong Kong’s model by requesting China’s Ministry of Finance to apply on its behalf. Taiwan rejected this condition, and Minister of Finance Chang Sheng-ford was quoted saying “the matter will be left for the new administration to decide.” 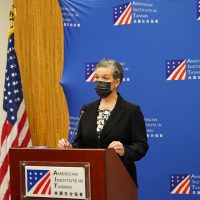 Taiwan this year experienced its steepest economic growth in more than a decade. But a slower pace is expected in 2022 due to the higher...