Taiwan is redoubling efforts to halt the spread of dengue fever, which has hit the southern part of the island hard over the past two years.

Growing global concern about the Zika virus has led to intensified efforts to combat the white-speckled Aedes aegypti mosquito that also transmits dengue fever, a disease that has ravaged southern Taiwan in recent years.

Despite having being around for decades, Zika previously aroused little attention because its symptoms were considered relatively mild. But that situation changed dramatically in October last year when it was discovered that Zika was to blame for microcephaly (unusually small heads and damaged brains) in the children of infected pregnant women. The World Health Organization (WHO) is now describing Zika as an international public health emergency.

But while the headlines these days are mainly about Zika, dengue is becoming an ever more present menace around the world, particularly in Asia and increasingly in Taiwan. “People tend to ignore epidemic threats until they perceive a potential direct impact on themselves,” comments Jonathan Schwartz, director of the Asian Studies Program at the State University of New York at New Paltz, whose research specialty is government responses to epidemics. “Zika is frightening a lot of people, and as a result they are pressuring governments to address the threat. Since there are notable similarities between Zika and dengue in terms of how they spread and how they can be controlled, this is having a positive impact on addressing the dengue threat as well.”

Dengue fever is ranked by WHO as the planet’s most serious mosquito-borne viral disease (malaria is spread by mosquitos but is caused by parasites, not a virus), and it is spreading the most quickly.

Over the past half century, the global incidence has increased 30-fold. From 50 to 100 million infections are estimated to occur every year in more than 100 countries – many more cases than for Zika – posing a potential threat to almost half the world’s population. The four different strains of the dengue virus together cause approximately 500,000 hospitalizations and more than 12,000 deaths a year around the world.

After previously having been largely brought under control in Taiwan, dengue has lately returned with a vengeance. The 2014 flare-up in Kaohsiung was the biggest outbreak in 40 years, with 15,000 cases. Heavy rains and resultant stagnant water were considered the cause, possibly exacerbated by that summer’s chemical-pipeline explosion, which badly damaged much of the city’s drainage system.

Last year relatively high temperatures, heavy rainfall, and stagnant water contributed to an even more severe dengue outbreak centered on the city of Tainan. Of the 43,784 confirmed cases in 2015, at least 25,000 were in Tainan. Some 200 deaths occurred, mainly among the elderly, for a mortality rate of nearly five per 1,000.

The unusually cold weather and numerous flu cases this winter, followed by heavy spring rains and increased temperatures, are considered indicators of a torrid summer ahead, making for the perfect dengue storm. In addition, given global warming trends, Schwartz and other experts see the likelihood that the Aedes aegypti mosquito will gradually spread northward, crossing the Tropic of Cancer and causing infection as it goes.

“In the past, dengue was mostly an imported disease that people brought back to Taiwan from trips to Southeast Asia,” Schwartz says. “As temperatures have risen, though, it has become endemic in Taiwan. El Nino-driven warmer weather may contribute to a larger outbreak this year.”

At the Centers for Disease Control under the Ministry of Health and Welfare, Yang Chin-hui, director of the acute infectious diseases division, stresses that “dengue is an environmental disease, so it’s essential to eliminate potential breeding sites, such as plant pots and water barrels. Containers should be emptied and cleaned, while people should use insect repellent and wear long-sleeved clothes and pants to avoid being bitten.”

Yang notes that Taiwan eradicated malaria just over 50 years ago. With political will and application of the right programs, getting rid of dengue is also achievable, she adds, even if significant challenges will have to be overcome. “Today, the population is greater, housing is more crowded, and we have created many places that are good for Aedes aegypti to hide and breed.”

Yang emphasizes the importance of preparing for an outbreak, rather than being reactive. A key part of that preparation, she says, is to set aside sufficient budget ahead of time, rather than deploying funds only when the crisis appears, as often happens.

The government’s strategy for attacking dengue in 2016 is multipronged. The first element is raising public awareness [discussed below]. Second is prevention, which began in April and involved a public health campaign to get rid of breeding sites. Third, in the period of May through July, if cases of dengue have been confirmed, teams of health workers will be dispatched to spray insecticide to kill mosquitoes inside the buildings in question and for 50 meters on all sides. “It’s very labor intensive and takes up to 20 people to deal with one case,” Yang observes.

If dengue does take hold, the peak season will likely be October and November, before the epidemic winds down in December.

Given last year’s distressing experience, Tainan is doing its best to gear up for the coming warm season. “The government is very serious about this issue because an outbreak not only causes fear and threatens people’s lives, but it also causes a public health crisis, leading to a strain on medical services and hospital beds,” say Tainan Mayor William Lai and the city’s public health officials in a prepared statement for Taiwan Business TOPICS.

“Not only that, it also causes a sharp drop in the number of visitors, hitting hard Tainan’s tourism industry and affecting people’s livelihoods and the economy,” the statement continued. “All levels of government have started epidemic preparatory work and are establishing more rigorous prevention mechanisms.”

A “2016 Epidemic Cleaning Day Activity” was held on January 30, followed by further dengue-prevention activities, intragovernmental meetings, and seminars about the disease in a number of districts. Community outreach programs such as educational talks at schools and hospitals are ongoing. At the same time, the local government has been disseminating information about dengue prevention on social media, TV shows and other broadcasting platforms, and on garbage trucks.

This trickle-down government and local community approach involves everyone. It is an idea that Schwartz talked about when he spoke on “Strengthening Dengue Response: A Role for Community Engagement” at a National Cheng Kung University in Tainan conference in December last year. He suggested utilizing the existing network of lizhang (borough wardens) and linzhang (neighborhood chiefs) to tackle the epidemic at a grassroots level, so that the public health system and major hospitals are not overwhelmed.

“CDC Director-General Steve Kuo has already begun piloting this approach, reaching out to the lizhang in Tainan on a limited basis last year,” Schwartz says. “As he notes, the vast majority of dengue cases occurred in 300 li. So reaching out to the lizhang in these li, training them, educating them, and mobilizing them could potentially have a major positive impact.”

“The lizhang and linzhang have close relationships with the community and community groups,” stresses Schwartz. “They can educate these groups and mobilize them to distribute educational materials, spray against insects, clear out standing water, and identify places where standing water is likely to breed mosquitoes. They can organize community members to clean up waste sites that also tend to have standing water and breed mosquitoes, hand out mosquito netting, cooperate with local public health officials in identifying ill residents, and much more. In short, the role of the lizhang and linzhang is in both prevention and response.”

As part of the central government’s multifaceted approach, it is also looking at a number of other initiatives to stamp out the disease. These include experimental vaccines, one of which – Dengvaxia – was developed by the French company Sanofi and approved by WHO in mid-April for use in countries with high rates of the illness. The first mass immunization with the vaccine took place in the Philippines. Dengvaxia, costing just over US$22 a shot, is said to be 65.6% effective for two years after vaccination among nine to 16 year olds.

The United States’ National Institute of Allergy and Infectious Diseases has come up with another vaccine, TV003, which shows promise. A large-scale clinical trial was launched in Brazil at the beginning of the year.

Another strong candidate to eradicate the disease is a program called “Eliminate Dengue” led by Scott O’Neill, dean of the Faculty of Science at Australia’s Monash University. The not-for-profit program uses a bacterium called Wolbachia to stop the dengue virus from replicating inside the mosquitoes that transmit the disease, thereby blocking transmission.

In an email, O’Neill writes that the first efficacy trials in a dengue endemic country will begin later this year in Indonesia. “Long-term monitoring at our international project sites has shown that Wolbachia is sustaining itself at high levels in the majority of these sites up to five years after application. In areas where mosquito populations have high levels of Wolbachia, we have not seen any significant local transmission of dengue.”

“Although Eliminate Dengue’s main focus is on reducing dengue transmission, the Wolbachia method has also been shown to reduce transmission of other viruses including Zika and chikungunya,” O’Neill says, adding that WHO has endorsed the program.

“Once Wolbachia has been released into a mosquito population, we believe it will be maintained and not need to be reapplied,” says O’Neill. “The cost of the program is essentially front loaded during the establishment phase. In contrast, insecticide-based programs have to be continually administered at considerable expense.”

Like Schwartz and others, O’Neill believes that community engagement, particularly at the grassroots level, is crucial. “We only release Wolbachia mosquitoes with the support of local communities. During and after releases, we continue to engage with the local community to ensure that residents are informed about and understand our research and are comfortable with it. Over the past few months, at one of our project sites, Townsville (in northern Australia), more than 3,000 community members have voluntarily signed up to host our mosquito egg release containers.”

CDC’s Yang notes that many of these approaches to halt the spread of dengue are being implemented in Taiwan in a search for the most effective and economical way to overcome the disease. “This year is different because of Zika,” Yang says. “As a result, the central government is paying much more attention to dengue. We have had two serious outbreaks and now we have the chance to aggressively attack this disease. Not just hit it, but wipe it out.”

Pregnant women in particular are advised to: 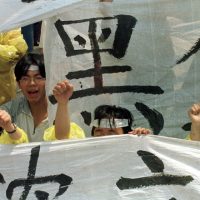