Economics is surely an inexact science, as indicated by the massive recalculation currently going on for Taiwan’s GDP growth forecasts for 2015. On August 14, the Directorate-General of Budget, Accounting and Statistics (DGBAS) slashed growth forecasts for the year from the 3.75% announced at year’s start to just 1.56%. Of the numerous factors cited as responsible for the decrease, the most immediate was the steep decline in export figures for the trade-driven Taiwan economy. While Taiwan’s GDP primarily consists of services, which generate nearly 70% of economic activity, exports are usually the main driver of growth.

Total trade fell by 11.3% through July, according to the Bureau of Foreign Trade under the Ministry of Economic Affairs, coming to US$302.57 billion for the seven-month period. July alone saw a 14% drop. Exports outpaced imports once again, but nevertheless declined by 7.8%, to US$165.97 billion, for the January-July period. Imports declined at a steeper rate, by 15.3%, to reach US$136.59 billion. The pain was felt in most major export sectors, particularly heavy industries such as steel and chemicals, which saw declines of 12.6% and 15.9% respectively. Electronics and machinery, which together contribute 48.6% of Taiwan’s exports, declined at a far slower pace of 2.7%.

Exports to China, which account for 38.9% of Taiwan’s total exports, continued their slump, falling by 11.9% in July for a 9.4% decline for the year’s first seven months. The impact of China’s sagging economy is likely partly to blame, but as most exports to China are components and materials for assembly into finished products intended for overseas destinations, the more likely culprit is a surging US dollar that has pushed up prices for electronics by 10% in many markets, according to technology research firm Gartner. The result is that consumers are holding out for better prices, leading to higher inventory levels and lower shipments. Gartner forecasts that sales of Taiwan’s IT products will decline by 5.5% for the year, citing the rising greenback but also stagnant growth in key markets. The EU, for example, is forecast to register 0.5% growth for the year, only slightly better than Japan’s 0.1%. Local technology research firm Trendforce sees tablet shipments dropping by 14.9% in 2015 on the global downturn and a lack of interesting new features, noting that tablets have failed to rise beyond their utility as simple entertainment devices, leading to declining interest from consumers. On the other hand, Trendforce sees DRAM shipments – of which Taiwan has a major share – maintaining volume but with revenues declining on falling prices.

Unemployment inched upwards, from 3.71% in June to 3.82% in July, affected by the entry of new graduates into the job market. Housing transactions, meanwhile, plunged to 16-year lows in Taipei, with the number of sales down by 15.7% year-on-year in Taipei City and 24% in New Taipei City. Despite the various pieces of bad news, Taiwan’s consumers seemed to be taking things in stride. Consumer confidence fell only slightly in August, from 89.58 in July to 86.15 in August, according to National Central University’s Research Center for Taiwan Economic Development, which conducts a monthly consumer confidence survey. The consumer confidence survey is on a scale from one to 200, with a score below 100 considered a negative outlook. The record high for the survey occurred in April this year, when the survey peaked at 92.93. 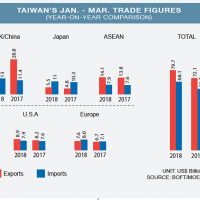 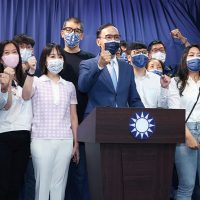