Many Taiwanese show a passion for food that exceeds even the legendary culinary enthusiasm of the French. When greeting each other, Taiwanese people often ask “Have you eaten yet?” rather than “How are you?”

Step into any popular restaurant in Taiwan and you will see foodies not only enjoying their meals, but also taking photos so they can share their experiences via social media. Renowned roadside vendors are often surrounded by throngs of customers. Some are blue-collar folk who live around the corner; others are prosperous professionals who believe the food justifies a long drive across town. In Taiwan, great fare crosses all social boundaries.

Taiwanese cooking is characterized by a preference for rice over noodles. Annual rice consumption is around 50 kilograms per capita, triple that of the United States. And not just any rice will do. Since the late 1920s, Penglai rice has been the most popular strain, though in recent years some farmers have begun cultivating Koshihikari Rice, a Japanese variant. As a result of population growth and the conversion of farmland for residential or industrial use, Taiwanese people now depend on imports to meet most of their food needs, yet over 90% of the rice they consume is grown on the island.

Pork and chicken are eaten more frequently than beef or mutton; duck and goose are also popular. Taiwan’s mild climate ensures that vegetables are available year-round. Greens tend to be stir-fried, often with garlic or ginger, rather than boiled or steamed. The majority of Taiwanese trace their ancestry to Fujian, the mainland Chinese province closest to the island, so it goes without saying that Fujianese cuisine has been a major influence on the way Taiwanese people cook and eat. Dishes are often braised or stewed, and seafood is common in both places. Pickled daikon and mustard greens, chili peppers, cilantro, fermented black-soybean sauce, peanuts, rice wine, sesame oil, and soy sauce are traditional condiments.

Japan’s 50-year colonization of Taiwan ended in 1945, but sushi and miso soup are still ubiquitous, and many Taiwanese adore sashimi. Browsing a Taipei restaurant directory, one finds eateries that represent not only Japan but almost every corner of the world.

The Taiwanese are proud of their national cuisine, yet at the same time exceptionally open to foreign styles of food preparation. It is in this spirit that the Taiwan Culinary Exhibition (TCE) annually celebrates and promotes the cuisines of Taiwan, the Chinese mainland, and ethnic Chinese communities overseas.

The 2015 event will run from July 17 to 20, held in areas A and D of the Taipei World Trade Center’s Hall 1. Taipei is undoubtedly the best place in the world for this kind of event, as the capital’s culinary scene benefited from a massive population influx after World War II. Refugees from every Chinese province followed Chiang Kai-shek’s Chinese Nationalist government when it relocated to the city. To make a living, many of these migrants began cooking and selling hometown-style delicacies. Half a century later, many of the eateries they established are considered culinary landmarks. The exhibition will be divided into five zones, with the first entitled “Fine Foods Meet Jade Utensils.” In the China of yore, society’s great and good often possessed jade chopsticks, goblets, saucers, and other exquisite items. At this year’s TCE, elegant jade pieces carved by Wu Yi-sheng – an artist based in Hualien, the only part of Taiwan where this ornamental stone is found – will lend an air of aristocratic extravagance to a selection of fine dishes created by 37 leading chefs.

But much more will be going on in the “Fine Foods Meet Jade Utensils” section. Some of Taiwan’s best-known restaurants and hotels will be offering visitors free samples of their signature dishes, plus special deals in the form of meal and accommodation vouchers. There will also be opportunities to taste Hakka and indigenous flavors, plus various cooking contests. One particularly interesting challenge will see chefs from different parts of the world work with one another’s ingredients to try to create new, exceptional dishes. The second area, “Food Utensils – Taiwan Tableware,” salutes the kitchenware produced in Taiwan over the past century or more. Visitors can watch a master craftsman repair bowls the traditional way, then try out attractive utensils created for Taiwan’s much-loved night markets. The designers hope these products can take the place of disposable plates and cutlery, not only for environmental reasons, but also to enhance the eating experience. Visitors seeking something unusual to brighten up their dining tables may well find it here.

“Foodstuffs – Freshness Workshop” is the name of the third area. One section will be devoted to Taiwan’s astonishingly diverse agricultural sector, another to the island’s fabulous array of native herbs and spices. In addition, those eager to explore one of mainland China’s lesser-known regional cuisines will relish the cornucopia of treats from Guizhou. The cooking styles of this landlocked province are quite distinct from those of neighboring Hunan and Sichuan, and often incorporate Maotai, a local liquor made from fermented sorghum.

Area number four is “Food Journey Time to Eat.” Among the exhibitors here will be the Taiwan Railway Administration (TRA). The lunchboxes served on TRA trains hold a special place in the hearts of Taiwanese, as many have fond memories of slowly enjoying these boxed meals during train journeys.

For some, the central attraction in this area will be the snacks often called “Taiwanese Small Eats.” These include such classics as oyster omelets (which, unlike many omelets cooked in Western countries, incorporate corn and sweet potato flour, and are served with a sweetish sauce), white rice drizzled with gravy and small chunks of braised pork, ice cream flavored with Tieguanyin oolong tea, and pearl milk tea. The last of these, also known as “bubble tea,” is a Taiwanese invention that blends black tea, chewy tapioca “pearls,” syrupy sweetener, and cream. One of Taiwan’s most successful culinary exports, it is now enjoyed as far away as London and Florida.

The fifth area is “Souvenirs – Great Gifts.” Mainland Chinese, Singaporean, and other visitors frequently fill their suitcases for the trip home with boxes of pineapple cakes, mochi, and “sun cakes” (taiyangbing), a specialty of Taichung. The range of high-quality, easy-to-pack food souvenirs grows each year, and many of the best will be on display at the TCE. 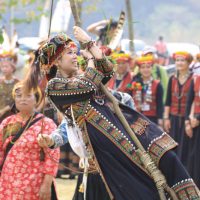 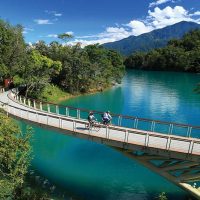 Seeing the Island on Two Wheels: the Taiwan Cycling Festival 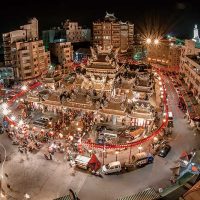