AmCham Taipei had expected that by the time this April issue of Taiwan Business TOPICS was published, the 2015 TIFA Council meeting under the U.S.-Taiwan Trade and Investment Framework Agreement (TIFA) would already have been conducted. The 2013 round of those bilateral trade negotiations was held in March that year in Taipei, and the 2014 session in early April in Washington. But so far no date has been set for the 2015 round, due to be held in Taipei again.

Although in principle the TIFA talks should take place annually, they did not occur at all between 2007 and 2013 because of U.S. displeasure over what it regarded as Taiwan’s unreasonable restrictions on the import of American beef. The delay in scheduling the 2015 talks has inevitably aroused speculation that the reason again is U.S. irritation over agricultural trade matters – this time centering on pork (though not all beef issues have been resolved).

AmCham hopes that such speculation is unfounded. As the previous five-and-a-half year hiatus in TIFA Council meetings made clear, refraining from sitting down at the negotiating table is counter-productive. Further, it is flagrantly unfair to all other sectors of U.S. business if their issues are not pursued because of a dispute over a single commodity.

While the speculation reflects the continued seriousness of the impasse over barriers to the entry of U.S. meat products, the official (and plausible) explanation for this year’s delay in the TIFA process is the current heavy workload at the Office of the U.S. Trade Representative (USTR), the relatively thin-staffed agency that handles U.S. trade negotiations. If that workload is a sign that all-out efforts are currently underway to finalize the first round of the comprehensive trade pact known as the Trans-Pacific Partnership (TPP) currently being negotiated between the United States and 11 other countries, it may actually be good news for Taiwan.

Although Taiwan is not a party to that first round, the Ma administration and both major political parties clearly realize that this international trade-dependent economy cannot afford to be excluded for long from such an important regional trade bloc as the TPP. The solution is for this country to participate in a second round of negotiations when it takes place to enlarge the TPP’s scope, but the content of a second round will not be considered until the first one is concluded.

With that eventuality now apparently drawing closer, it is incumbent on the Taiwan government – both the executive and legislative branches – to demonstrate convincingly to the global trading community that Taiwan deserves inclusion in the TPP. It is not sufficient that Taiwan is among the world’s top 20 trading nations. Rather, this country needs to show concrete progress on last year’s promise to revise laws and regulations in Taiwan that are out of step with international standards and practices. Further, Taiwan must deal forthrightly with any outstanding trade issues with the existing 12 TPP negotiating parties, since each one of those countries will in effect have veto power over entrants into the second round.

Some observers worry that China will also have veto power, albeit behind the scenes, on Taiwan’s TPP participation. But while Beijing may be able to privately pressure others to refrain from entering into bilateral free trade agreements with Taiwan, the TPP – which in principle is open to any APEC member – should be a different story. As long as Taiwan can deliver not only trade volume but a firm commitment to trade liberalization and regulatory accountability, it will be hard for anyone to publicly deny its qualifications for TPP membership.

Promoting the Exchange of Talent 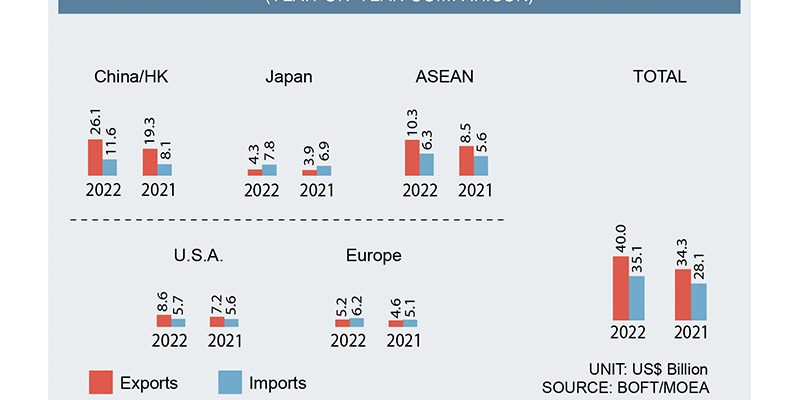