From modest beginnings, the dumpling restaurant has grown into an international empire. When foreign tourists come to Taiwan for the first time, they usually have a plan – whether written or mental – for what they want to see and do here. In the Taipei area, besides appreciating the treasures at the National Palace Museum and enjoying the panoramic view from the observatory floor of Taipei 101, the list often includes savoring a serving of dumplings and other delicacies at one of the restaurants belonging to the famous DinTaiFung chain. It has become one of Taiwan’s best-known brands.

Once a humble neighborhood eatery at the corner of XinYi Road and YongKang Street, DinTaiFung has since expanded to a network of nine restaurants in Taiwan (including a popular venue in the Taipei 101 Mall with a seating capacity of more than 300 diners) and – at last count – a phenomenal 100 outlets around the world, the majority of them run on a franchise basis. Outside of Taiwan, DinTaiFung branches can be found in mainland China (23), Singapore (19), Japan (14), Indonesia (13), Korea (7), the United States (a total of 6, in the Los Angeles area and Seattle), Australia (6), Malaysia (5), Hong Kong (4), Thailand (2), and Macau (1). Of the 9,000 employees worldwide, 1,000 are in Taiwan.

Next on the expansion list will be a restaurant in Dubai, where no pork will be served; chefs for that outlet have completed training in Taipei and will depart for the U.A.E. this month. DinTaiFung is currently considering such additional markets as the Philippines and England, says Chairman Warren Yang.

DinTaiFung was founded by the chairman’s father, Yang Bing-yi, a native of Shanxi Province who left for Taiwan in 1948 at the age of 21 in the midst of China’s civil war. With the help of an uncle, he found a job as a deliveryman for the HengTaiFung cooking oil store. When the shop closed a decade later, Yang and his wife, a former co-worker at HengTaiFung, went into business for themselves, selling oil purchased from wholesaler DinMei Oils. Borrowing the character Din (鼎, usually spelled Ding) from the oil company and TaiFung (泰豐) from their former employer, they came up with the name for their new enterprise.

Business was good until the 1980s when canned cooking oil hit the market, drastically reducing demand for traditional oil retailers like the Yangs. In response, they turned half of their premises over to making and selling steamed dumplings, which were such a hit that the couple soon gave up selling oil and converted the entire shop into a restaurant. To get to their tables, customers had to squeeze by a work area at the front where cooks were assiduously kneading and rolling out the dough and stuffing and folding the dumplings. The aroma emerging from the large steamers was enticing.

At the age of 88, Yang Bing-yi still drops by the original XinYi Road restaurant almost every day for lunch.

Asked the secret of DinTaiFung’s success, Warren Yang emphasizes the high standard of quality the restaurant seeks to maintain in both the food and the service. Describing the xiaolongbao (小籠包) or pork dumplings, for example, he says proudly that the “skin is much thinner and there’s more filling” than in other products on the market, plus the restaurant uses high-quality pork obtained directly from contracted abattoirs. Each dumpling should weigh precisely 21 grams, he notes, with 16 grams of filling. (In a given month in Taiwan, DinTaiFung sells 2.3 million pieces of dumplings of all kinds). For DinTaiFung’s signature steamed chicken soup, Yang says only 16-week-old chickens from a particular farm in Taitung are used, whereas the typical age of chickens slaughtered in Taiwan is about six weeks. “At 16 weeks, the bones are firmer, which makes for a tastier broth,” he explains. “This is special chicken. If you went to the market looking for it, you wouldn’t find it.”

In the past few years, DinTaiFung has added several new dishes that have proven extremely popular, including a delectable pork xiaolongbao with truffles. But old standbys like fried rice dishes, wontons, steamed buns, and various desserts continue to have loyal followings. “In most restaurants there might be just a couple of dishes that are excellent, but our customers tell us that everything on the menu is really good,” says Yang.

Staff morale is as important as the food, in Yang’s opinion. “If you’re unhappy, how can you give good service to the customers?” he asks. He says he sees to it that personnel are well-paid and well-treated. Jovana Macura, a 24-year-old native of Serbia who has been interning at DinTaiFung for the past 10 months, testifies that the team at the restaurant has been like a family and she turns tearful at the thought that she will soon be departing.

Macura, who speaks little Chinese, is assigned to attending to English-speaking customers, giving them information about the restaurant and the various dishes. “I show them how to mix the sauce for the dumplings – one part soy sauce to two parts vinegar is the right combination,” she says. “But it’s better not to put any sauce on the truffle or green squash (絲瓜) dumplings, since the taste is too delicate.” In her experience, American guests tend to be partial to the pork truffle dumplings, and the many vegetarian customers from the United States enjoy the restaurant’s vegetarian offerings.

Previous interns have come from Russia, Poland, and Brazil, and one current regular staff member is from Finland. In addition, many of the local employees are multilingual and wear flag pins to identify which languages they speak: English, Japanese, Korean, French, Russian, Italian, German, and Spanish. Menus are available in Chinese, English, Japanese, and Korean. That service is important, since about 20% of the customers tend to be overseas tourists – with Japanese the most numerous.

“Many of the foreign visitors had heard about DinTaiFung from their friends and want to see what it’s like,” says Yang. “Some of them enjoy the food so much they come again the next day and maybe even the day after that.” DinTaiFung is unquestionably a major success story – not only among Taiwan-based restaurants but among local enterprises in general – in terms of its high quality of product and service, achievement in branding, and ability to penetrate international markets. Two of its restaurants in Hong Kong have held Michelin stars.

But is it correct, as DinTaiFung has long stated, that in 1993 it was selected by The New York Times as one of the world’s 10 best gourmet restaurants?

In the Travel section of the Sunday Times on January 17, 1993, DinTaiFung was indeed the subject of a highly complimentary review that called the food “outstanding.” The five-paragraph article was part of a cluster of reviews of 10 restaurants from 10 different parts of the world, yet nowhere did the newspaper claim that these eating establishments represented the best around the globe.

Rather than engaging in any intentional attempt to deceive, most likely DinTaiFung (or Ting Tai Fung, as the Times spelled it in 1993) was led astray by a misreading of the English headline, which referred to the selected restaurants as “Top-Notch Tables.” To a native English speaker, it is clear that “top-notch” simply means first-rate or high-quality. But the phrase was apparently taken to mean the very best of the best.

Over the years, the boast has been repeated so many times that, like an urban legend, it has taken on a life of its own. Do a Google search of “Din Tai Fung New York Times” and you’ll find hundreds of references to the leading U.S. newspaper having rated the restaurant as one of the 10 best worldwide. The claim has appeared on scores of foodie blogs and websites, as well as in Lonely Planet, Forbes, and incredibly The New York Times itself, whose copy desk failed to fact-check the assertion in an article from Taipei in 2012. Did no one wonder how a dumpling house could rate at the very pinnacle of the culinary elite?

If anyone had gone back to look at the original newspaper layout – searchable on microfilm at most major reference libraries – he or she would have found another clue that something was amiss. The 10 restaurants reported on did not include any in such world-class centers of gastronomic mastery as Paris, London, or New York; instead, most were in locations – such as Freinsheim, Germany; Rhinebeck, New York; Saint-Etienne, France; and Llanddewi Skirrid, Wales – that could be considered off the beaten track.

In fact, the collection of reviews was prefaced by the introduction: “10 food experts choose restaurants that inspire a pilgrimage.” The inclusion of DinTaiFung was certainly a tribute to the restaurant, but it might also be seen as an indication that the Times regarded Taipei as an unlikely spot for culinary distinction. 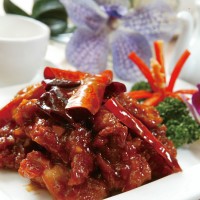 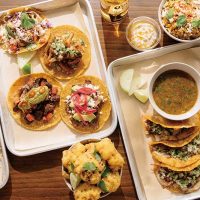 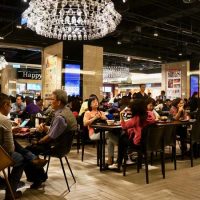