Progress in the past half year has been encouraging on numerous front.

AmCham Taipei’s Taiwan White Paper is published annually in June, making this month the halfway point in the Chamber’s advocacy cycle and therefore an opportune time to review the progress of the 2014 White Paper issues.

Nearly all of the 22 AmCham committees that presented White Paper position papers with suggestions for improving the business climate have already received responses from the relevant government offices, and representatives of most of those committees have also had face-to-face discussions with the appropriate agencies. Following are the most noteworthy developments to come out of the current White Paper exercise so far:

Healthcare. For years, one of the most important yet intractable White Paper issues has been the Pharmaceutical Committee’s plea that manufacturers of original drugs receive more effective protection of their intellectual property through mechanisms known as Patent Linkage and Data Exclusivity. The issue first made its appearance in the White Paper a decade ago, but no progress occurred until this past year when the Office of the U.S. Trade Representative (USTR) raised the question as part of the bilateral Trade and Investment Framework Agreement (TIFA) process.

At the 2014 TIFA Council meeting in Washington in April, the Taiwan side committed to implement Patent Linkage – for example, to start building the necessary patent database and devising a system similar to the U.S. “Orange Book” to prevent generics from entering the market while the original drug still holds a valid patent. With support from the Taiwan Intellectual Property Office (TIPO) under the Ministry of Economic Affairs, the Taiwan Food and Drug Administration (TFDA) expects to have draft legislation completed next year for submission to the Legislation Yuan in 2016.

In addition to undertaking Patent Linkage, TDFA has agreed to provide three-year Data Exclusivity protection to new indications of drugs, confirmed that biologics already enjoy five years of protection the same as new chemical entities, and opened the door to considering extension of the biologic coverage to 12.5 years as is done in the United States.

Another positive development was acceptance by the National Health Insurance Administration of the Pharmaceutical Committee’s request for establishment of a tracking system to enable companies applying for reimbursement to trace the status of the application online in the interest of transparency and efficiency (logically a similar system could be implemented for medical devices). The NHIA has also agreed to broaden the representation on the Pharmaceutical Benefit Reimbursement Scheme (PBRS) committee, currently dominated by hospital administrators, to bring wider input into reimbursement decisions.

Chemicals. The sole White Paper issue raised by AmCham’s Chemical Manufacturers Committee this year had to do with the government’s plan to introduce two separate new registration systems for chemicals and products with chemical ingredients– one procedure overseen by the Environmental Protection Administration (EPA) and the other by the Occupational Safety and Health Administration (OSHA) of the Ministry of Labor. The committee’s main requests were that government take industry’s views into consideration in devising the enforcement rules to minimize the burden on manufacturers and importers, and that companies’ confidential business information (CBI) be duly safeguarded during the registration process.

Despite the complex subject matter, the coordination process turned out to be generally satisfactory. Industry was given ample opportunity to present its suggestions, and the authorities accepted a number of them. These include the establishment of a single registration window to meet both EPA and OSHA requirements, agreement to move toward harmonization of the two systems to the extent possible, extension of CBI coverage to 15 years along with adoption of a more flexible application process, and creation of a grace period during which products already on the market can still be registered under the old regulations.

In the course of the consultations, the EPA also agreed that finished products containing chemicals would be exempt from the registration requirement if they already come under regulation by another government agency, as is the case, for example, with cosmetics’ supervision by the TFDA. Industry remains concerned, however, about one aspect of the new registration system – the low quota of 100 kilograms per year allotted for the import of each special chemical needed by R&D laboratories.

Financial services. The Chamber’s various committees in this sector – Asset Management, Banking, Capital Markets, Insurance, and Private Investment – have been impressed with the forthcoming attitude in the past year of the Financial Supervisory Commission (FSC) in seeking ways to support development of financial industries in Taiwan. A prime example has been the FSC’s active promotion of Taiwan as an offshore RMB investment center and its expansion of business opportunities for Offshore Banking Units (OBUs) and Offshore Securities Units (OSUs). In the insurance field, in line with a recurring theme in recent years’ White Papers, the Commission has moved to shore up financial soundness in the Taiwan market as a whole by cracking down on companies with inadequate risk-based capital.

Regarding the welcoming of investment in Taiwan by private equity firms – an issue broached in the Overview section of the White Paper – the FSC in recent months has held further discussions with representatives of the PE Committee and has addressed a number of the industry’s issues regarding the transparency and predictability of the investment approval process. Although the Committee is highly encouraged by the progress, it hopes to see an even clearer written statement of policy.

At a meeting in November with AmCham financial services executives, FSC Chairman William Ming-chung Tseng expressed the desire to explore several other White Paper suggestions, including liberalized rules on securities borrowing and lending and permission for brokers to conduct third-party clearing. Recognizing the financial burden that the recent increase in the business tax has caused for certain sectors of the insurance industry, Tseng also offered to coordinate with other executive-branch agencies and the Legislative Yuan to seek to ameliorate the situation.

Cigarette smuggling. Both the Customs and International Trade Committee and the tobacco industry position papers cited the need for stronger enforcement to control the mounting quantity of illicit cigarettes entering the market and offered for sale at low prices. The phenomenon deprives the government of tax and tariff revenue, undermines the business of legitimate enterprises, and thwarts the official policy of discouraging smoking. In a meeting with AmCham committee representatives, the Customs administration gave assurances that steps were being taken to crack down on smuggling, including the training of tobacco-sniffing dogs that will be on duty at every major airport before the end of the year. In addition, customs agents will monitor airport duty-free shops to curb the practice of tour guides prompting incoming Chinese tour group members to buy cigarettes that are then sold into black-market channels after the group leaves the airport.

“All in all, we’ve seen some substantial progress in some key areas over the past year,” said AmCham President Andrea Wu. “We’re confident that much more can be accomplished over the coming six months in advance of the 2015 White Paper’s publication.” With many observers predicting that 2015 could bring the conclusion of the first round of the Trans-Pacific Partnership (TPP), she notes that the coming year will be a crucial period for Taiwan to bolster its candidacy for second-round membership by bringing its regulatory regime further in line with international practices. 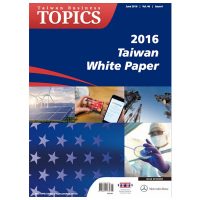